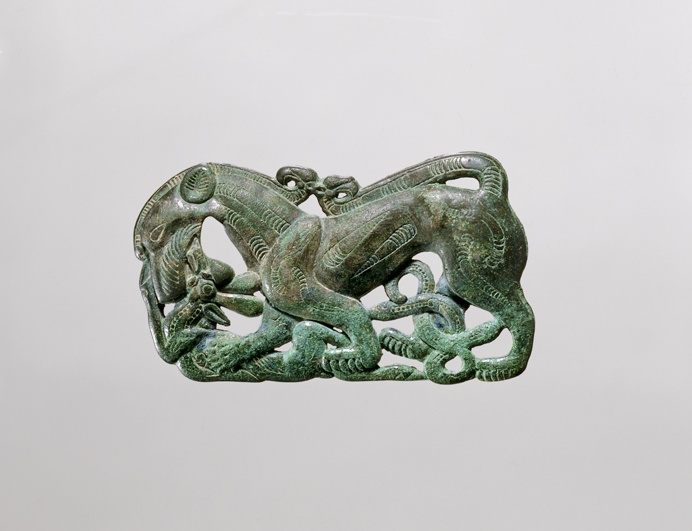 Cast by the lost wax method (the wax probably made by pressing into a mould, then removed and touched up), extensively cold-worked, hammered, chiselled and burnished. A vertical loop for attachment behind the rump at the back.

Condition: patina a varying greyish green with silvery tinges and bright green chlorides with touches of blue and parts a mat purplish brown. An iron stain deposit on the shoulder.

A wolf with mane and tail ending in raptor heads relishes his kill as he is about to devour a deer; two snakes intertwined below his body. Somewhat hybrid in keeping with E. Bunker's mention [2] that the snakes are a Chinese Warring States subject matter and that the raptor heads - a hybrid design - are a typical steppe motif. She also adds that snakes adorn many Qin artefacts, to which we would like to add that they also are characteristic of decorative reliefs, ornaments and belt plaques of the Dian from the high plateau of the Dian lake in Central Yunnan.

With respect to this belt plaque, she says that very similar pieces have been excavated in nomadic sites in Southern Ningxia and Southeast Gansu: "... probably made by the state of Qin during the Warring States period expressly to trade with the nomads for horses which the Chinese desperately needed. The Qin occupied most of the Shaanxi province which explains their contact with pastoral tribes buried in Ningxia and Gansu."

1 We have adopted the dating of E. Bunker. A. Salmony (Sino-Siberian Art in the Collection of C. T. Loo <Paris, 1933>) some sixty years ago reproduced several plaques pl. XXIV nos. 3, 4, 5 of a similar type to this example and embodying some of its details and features. The products of artistic intercrossings, he stated they are no longer a part of the steppe circle and dated no. 3 around A.D. 500 as being the earliest type; however, the other two are relatively illegible and discussing this he dated them later and up to the end of the millennium.