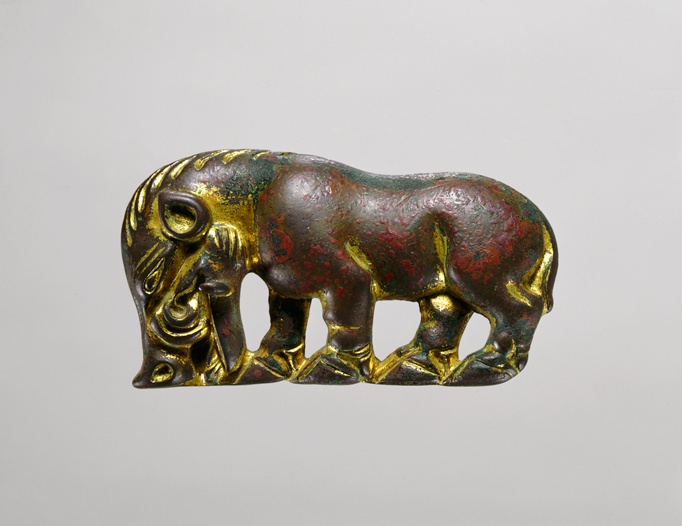 Cast by the lost wax method. The wax model which would have been encased with clay for casting was probably prepared from a carved negative, or one stamped in clay. Two horizontal loops at the back for attachment: at both ends, on the reverse of the eyebrow and lower buttock. The surface was cold-worked, mercury-gilt, then burnished.

Condition: most of the gilding worn away revealing a light brown metal with patches of green patina and spotty splashes of red cuprite.

Good comparisons are a gilt bronze plaque in Los Angeles [1], though here two boar protomes are joined at the midriff, and two gilt bronze boar plaques in China [2] .

E. Bunker writes [3] to us: "Your boar was probably made during the Qin or early Western Han period at some Chinese metalworking center to trade with the Xiongnu who were the major pastoral tribes at the time on China's northern borders."

1 County Museum of Art M.76.97.586: Moorey, P.R.S. et al.: Ancient Bronzes, Ceramics and Seals. The Nasli M. Heeramaneck Collection of Ancient Near Eastern, Central Asiatic, and European Art (Los Angeles, 1981), no. 834, p. 156 (E. Bunker). The author states that the plaque has residual cells for inlay which obviously refer to the ears and the nostrils; however, as these last appear to be gilt as on the present example, we question whether this be so. A visual observation from the black and white photograph, as we have not had the plaque in hand or physically seen it. E. Bunker agrees with us.