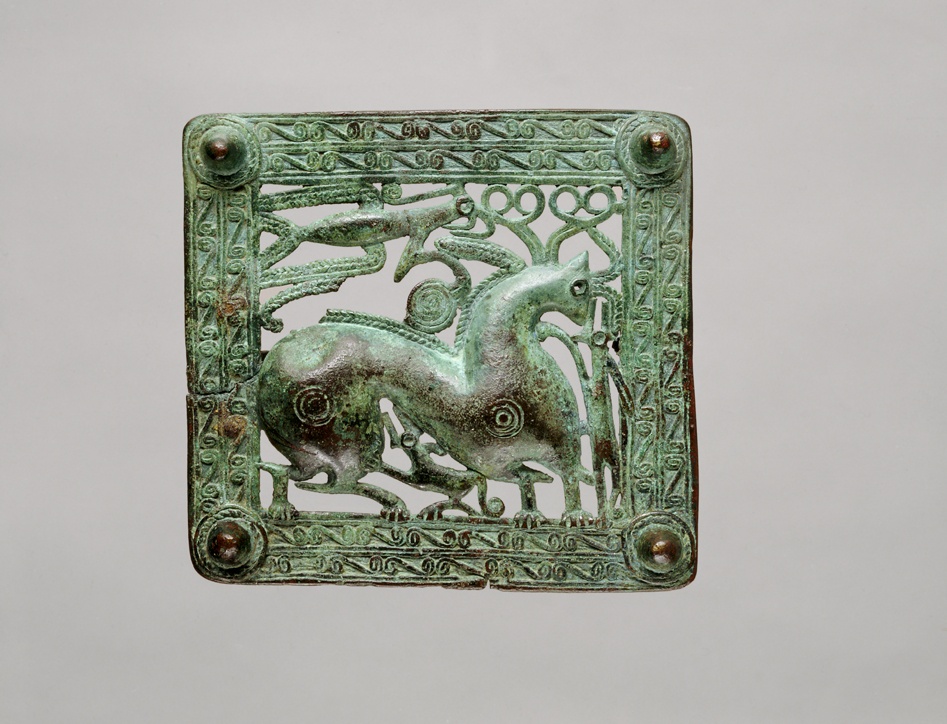 Cast by the lost wax method, the wax probably prepared as for the boar, cat. no. 218; a cone on each of the four corners; the stag's shoulder and thigh bulbous and decorated with incised circles; on the reverse a loop and hook. Lightly worked over in
the cold.

Condition: patina a light green with a dark claret-coloured metal showing through and the odd spot of iron deposit; on the reverse the hollow body of the stag with casting burrs. A crack through the border behind the buttock, a nick on the lower edge, a crack through the upper body of the bird; two different parts of the tail - that curves up and forward above the stag's body ending in a spiral - missing; an indent on the croup.

The rectangular belt clasp is decorated with a wide border, a double row of S-spirals framed by three double lines. The central motif of the openwork design a stylized stag and, in keeping with the usual pattern, three smaller animals - here, on the present example, a dog [1] below its belly and another in front of its chest, and a bird of prey above its back.

There are many similar plaques with similar type borders, sometimes with three rows of S-spirals or with herring-bone patterns and other slight variants; the same holds true for the scene of which the central animal is usually either a stag or horse and the lesser figures dogs, birds, goats or foals.

A close comparison is the belt plaque in Los Angeles [2] .

1 Usually described as such and probably indicating a hunting scene. The thought that it might be possible to see in these creatures two fawns, one attempting to suckle and the other reaching up to its mother's face in a gesture of playful tenderness, is a tempting one, though their long ears are more in keeping with those of dogs.