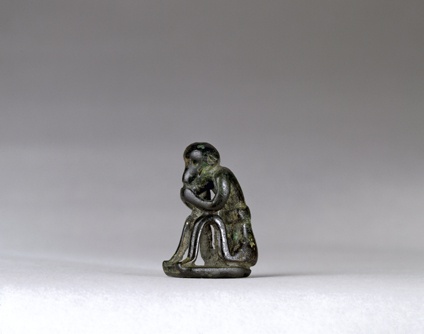 074. Seated Figure on Base - Geometric

Solid-cast by the lost wax process, some working in the cold: the hollow eyes (formerly inlaid), the wedge-shaped left ear, the
slit of the mouth. Also, a coarse volcano-like pit (diam. c. 5 mm) made at the place of the right ear, filled with metal (there are traces of soldering), and a very small similar incrustation at the base of the right hip probably served to affix a small chain,
surely transformations indicating that later our figure was worn as a pendant.

Condition: patina green black and smooth, possibly from wear and repeated fondling as an amulet or pendant; but slightly mottled, pitted and bright green in a few places. The front, inside of the body left rough.

This ithyphallic figure is more probably a monkey than a man wearing a simian mask, notwithstanding the wide sash around his midriff. He holds something to his mouth, probably some sort of fruit unless it be a cup from which he drinks.

A definite attribution to a workshop is difficult. His very long drawn-up legs and somewhat shorter arms are very fluid and though limbs of similar feeling are to be found on later objects from Thessaly [1], he is definitely, on account of his plastic density and superior execution, not to mention the carefully worked base, Peloponnesian. The base plate is incised on its edge with a line, clearly visible on the front, back and still on the right side though worn; it has completely disappeared from the left. The underneath [2] is divided lengthwise by a central line, on either side an undulating line and hollow interstices.

Few comparisons are convincing as the finest examples [3] are highly individualistic. A parallel is to be drawn with a statuette [4], unfortunately of unknown provenance, like our statue very naturalistic though rather coarse.

The school or workshop that produced him was in Argos, Tegea, Sparta, or possibly, a Laconian workshop in Olympia. However - in spite of features in favour of Tegea (see footnotes 2 and 3,
the figure's head of somewhat similar shape, and the manner in which the waistline flows into the hips and buttocks, the left leg, etc.) - we think that our figure belongs to Sparta, for the undulating lines under the base, found under Laconian horses, but most especially for the way the hipline with a broadening of the pelvis flows into the buttocks and curves up into the legs (see footnote 3).

For the meaning of our figure we agree with Susan Langdon [5].

Derived from the East, the figure of the monkey amused and stirred the imagination of the Greeks, who created their version with an intentional ambiguity which leaves us often perplexed as to the exact identity of the statuettes. Satisfying the Greeks' sense of bawdy humour, in essence representing man, such figures combined "eroticism, fertility and regeneration". They were at first dedicated as votives, and later adopted as talismans, when they were worn as pendants [6], as exemplified by this figure.

4 Oxford, Ashmolean Museum 1936.608: Jantzen, U.: AA 67-68, 1952-53, p. 64 ill. 10, p. 67 no. 7; it surmounted a pendant composed of a shaft with outgrowing knobs and is to be placed among the earliest types of this huge series of objects found in Northern Greece and elsewhere that certainly hark back to a Peloponnesian prototype similar to our figure. Stylistically, this is confirmed as both the figurine and the knobbed shaft evolve within the series from a full plasticity towards a flat cut-out angularity, almost an abstraction of the prototype.

6 Probably from the belt, as were wont to be the knobbed
shaft pendants.