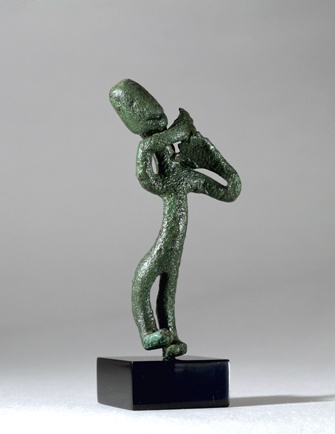 Solid-cast by the lost wax process with finishing touches added in the cold: punching for the eyes, hammering for the hands and chiselling for the fingers.

Condition: the patina a mottled greenish-black on a somewhat grainy surface; a large patch of greenish hardened copper chloride on the outer-underside of the right foot. The lower right leg and foot distorted.

The statuette is Laconian mainly on account of the flat broad hammered hands with the clearly marked fingers. This characteristic is to be found on the best comparison, the upper part of a bronze figurine found in Olympia [1] and on another rustic figure from Sparta [2]. Similar large hands with cut-out fingers are to be seen on some Geometric pottery fragments from the Amyklaion (near Sparta) [3].

The date of this unique figurine with its lovely flowing line that curves from the top of the head down to the heel of the left foot is open to question.

There is no doubt that the contortion was deliberately created by the artist notwithstanding the distortion to the lower right leg and foot; the position of the arms is original.

It has been variously dated: to c. 900 B.C., applying Kaulen's hypothetical assessment of the characteristics of sculptural development to our statuette, which he discusses; or to the 9th century B.C., Early-Severe Geometric (Demargne); and by the writer, following Demargne, to anywhere between 900 and the early 8th century B.C. (Hommes et Dieux).

The comparison in bronze from Olympia has been dated to the first half of the 8th century [4].

As there are no sexual features although male statuettes always seem to be sexually differentiated, even if only summarily, our figure could be a young girl.

This votive offering, full of intensity and vivacious in movement, thus represents a mortal, possibly dancing.

3 Buschor E., von Massow, W.: AM 52, 1927, pl. IV. This reference kindly brought to our attention by J.-L. Zimmermann who confirmed that the large hands were a characteristic of the Laconian school at this time but added that they were not a chronological factor.

4 According to J.-L. Zimmermann in a verbal communication.