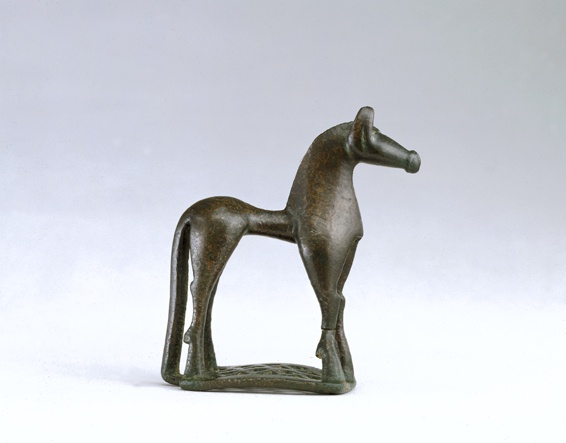 077. Horse on Openwork Base - Geometric

Solid-cast by the lost wax process; from wax modelled and sculpted; the casting done with the main entry for the metal being the muzzle, with traces of a subsidiary entry or air vent at the point of his breast between the shoulders. Surface filed and polished in the cold.

Condition: patina mottled medal brown and black; right foreleg bent in and broken above the fetlock. Some wear - the muzzle ring groove and ear grooves as well as the once serrated edge of the mane are almost completely worn away. The middle of the base slightly bent.

A votive offering dedicated in a sanctuary to curry the favour of the gods or to exhibit power and social rank.

The horse was par excellence a symbol of the aristocracy and of their status, justified by courage and war-like prowess at a time when their code of honour and pursuit of arete (excellence) were in keeping with the mores of the Homeric poems.

The horse was also the finest artistic expression of all Geometric zoomorphic creations. Usually larger than most other animal representations, he condenses by and in his forms the essence of horsiness in the Platonic sense.

Definitely Laconian, he is a good example of this school: the high legs, the very short and cylindrical body, the long head resting on a short, powerful neck and, most characteristic of all, the rectangular base (often with openwork triangles) with its prolongation for the tail [1]. It also conforms to the usual Laconian casting technique.

There are numerous parallels with minor variants for both the horse and the base [2]. The affinity between Zimmermann's Lac 92, 94 (the present example), 58 and most especially the animal part of the centaur, his Lac 60, could indicate a common workshop.