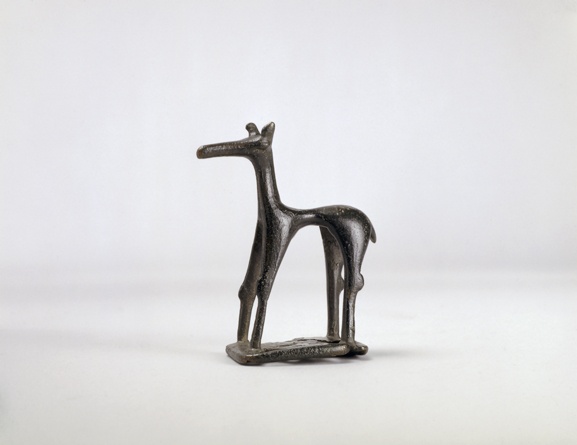 078. Doe on Openwork Base - Geometric

Solid-cast by the lost wax process. Probably a wax block carved out - sculpted and the casting done with the main entry for the metal being the muzzle, with possible traces of a subsidiary entry or air vent at the point of her breast between the shoulders. A burr on the back upper part of right foreleg and beneath tail. The neck and back to the rump striated lengthwise; surface filed and polished in the cold. A very thin sheet of metal added and annealed to the upper part of the base after the original cast to fill the triangular interstices, of which parts remain.

Condition: patina very dark green with traces of metal on end of muzzle and tips of ears. Back left corner and right side of base missing due to imperfect flow or shortage of metal while casting.

Some thirty years ago the writer ascribed the doe to Boeotia, probably on account of its extreme elegance, and in view of the delicacy of certain Boeotian works such as the famous "deer and fawn" from the Cabirion of Thebes [1]. Central Greece is not to be wholly excluded but, if so, Locris is to be preferred (obviously strongly influenced by neighbouring Boeotia).

Sparta or Tegea seem the prime possibilities. In favour of Sparta is the casting technique, the stand [2], the profile of the opening between the fore- and hind legs [3]. There are two comparisons for the outline of the opening between the front legs and a similar plastic feeling in two horses ascribed to Sparta by Zimmermann [4]. A parallel in Baltimore [5] is from the same school as ours, with the same base but without addition of thin sheet metal on top, with identical body stance though less refined and elegant than our doe and with head and neck in less stylized posture.

However, in favour of Tegea is the probably considerable quantity of deer in the Arcadian mountains as well as the historical predilection of the Arcadians towards the doe since she appears in several of their legends [6].

A doe [7] from the sanctuary of Athena Alea, though incomplete, and as far as we can see from the reproduction, conveys a similar mood through a certain fluidity and the bearing of the head. Also, a technical detail is worthy of note: its neck is described by Dugas as not being cylindrical but worked lengthwise in six more or less contrasting planes. This bears a relation with the far more subtle working on the neck of our example. A sort of faceting which would be in keeping with working in hard wax.

From the same sanctuary are several representations of stags [8].

She is vibrant with naturalism though highly stylized and expresses exactly the spirit of her living counterpart in nature: a doe at dawn reaching the edge of a forest and suddenly stopping, her head alert, her ears pricked up, as her inner instincts apprehend the possibility of danger.

1 Boston, Museum of Fine Arts, H.L. Pierce Fund 98.650: Comstock, M., Vermeule, C.: Greek, Etruscan & Roman Bronzes in the Museum of Fine Arts Boston (Boston, 1971), no. 3, p. 5. We named the artist "Master of the Boston Deer and Fawn" and attached a few works to him; this was communicated verbally to Prof. David Gordon Mitten, suggesting that with a little research, the group could be enlarged. This he did, publishing six figurines in BMFA 65, 1967, p. 14 n. 26; taken up by H. Hoffmann (Ten Centuries that shaped the West <Houston, 1970>, p. 148); and now, the subject of an article by J.-L. Zimmermann: Bronziers béotiens et cervidés géométriques, Quad. ticinesi di numismatica e antichità classiche, XIX, 1990, p. 10 ff.