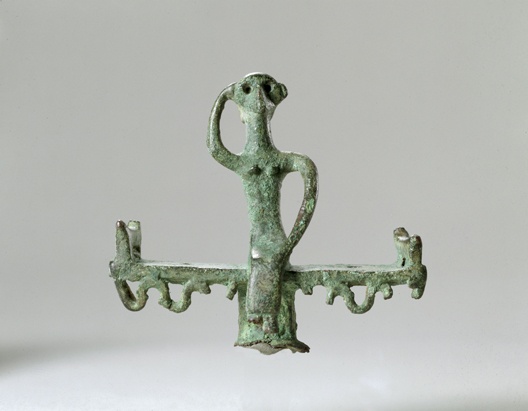 Solid-cast by the lost wax process, worked in the cold and polished.

Eye inlays missing. Grooves on middle of back of head indicating hair strands worn away. Tips of bench ends abraded; loops of "snakes" missing as well as sphere and extended lower part of pendant. Her feet also missing.

We are faced with the questions: who is she, what does she represent, what was her religious or social function, what is going on?

Seated on a bench, her raised right arm blends into the ear as though the ear were her right hand; similarly, the left hand, imperceptibly outlined, rests through the dress on her left knee - both simplifications in keeping with the period. Her head surmounting a long thick neck is somewhat monkey-like with its intense expression, hollow eyes, beak-like nose, the curve of which, marked with a line for the mouth, extends to the chin at the tip of a triangular jaw. The hair, a series of longitudinal incisions, is thick over the nape as though rolled. She is clothed in a simple garment that ends at mid-calf without any indication as to where it starts, leaving us to conjecture whether her button-like breasts are bare or not.

The bench has mysterious side-pieces [1]: concave on top and pointed, an open space beneath as though a stylization derived from a recumbent quadruped with his legs drawn up under him. Between the figure and the ends, the plank of the bench is pierced by two round holes; in our opinion to enable suspension. On the underside, the end and front edges are decorated with wavy strips recalling snakes.

Below the bench is the beginning of a stand in the form of a shaft, rectangular in section, of which the continuation is missing as it flares outwards with a downward curve, clearly visible on the front and left side, into what would have been a sphere [2], hollow-cast, probably with slit openings and ending below in a small knob (see cat. no. 80), but more likely with a further section, a shaft ending on a flat circular disc [3]. The figure's feet probably rested on the upper part of the sphere.

In the past the piece has been tentatively ascribed to the Peloponnese with a question mark. In favour of this are the "snakes" below the bench similar to those found on the underside of certain horse bases from Arcadia and Laconia, her long wire-like arms that bear resemblance to figures from there [4], her affinity with the monkey-man ambiguity of certain of these figures, and her quality. The last is a somewhat subjective criterion, considering her a Peloponnesian type that was later developed and adopted in Northern Greece. However, notwithstanding also the facial resemblances with such as the figure from Athena Alea in Tegea4, figures on a circular, oblong or biconical sphere seem unknown in the Peloponnese [5].

In addition there are the two "man on cage" figures from Macedonia, the one from Mavrochôri [6] which has a similar body and is in the same position with right hand to head and left to knee, and the one from Kozani [7] which has a similar body but where the position of the arms is inverted, right hand to knee and left to head. It is to be noted that all these figures from the Peloponnese and Northern Greece are males and we do not know their meaning.

In conclusion, however appealing be our female figure seated on a bench, we do not know what her gesture represents nor whether she is a divinity or a mourner. The "snakes" below the bench may suggest that she is a mourner, as they recall the wavy plastic lines on handles of small Late Attic Geometric funerary vases.

The suspension holes probably indicate that she is either a votive offering to be hung in a sanctuary or an amulet to be worn around the neck or hung from the belt.

1 Probably used as air vents in the casting which would have been head down.

2 Usually referred to as balls or cages.

5 I. Kilian-Dirlmeier (op. cit., p. 92) likewise states that there is no proof of any of these in the Peloponnese.