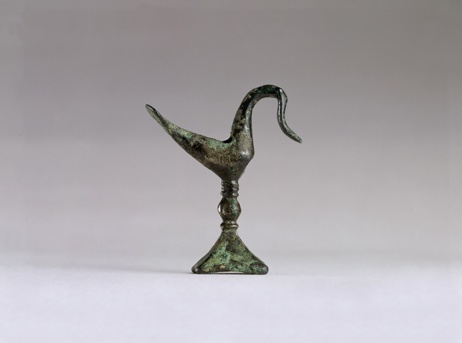 Ex collection:
A. Moretti, Lugano (received as gift from)

Solid-cast by the lost wax process with large diagonal hole for suspension from the small of the back to the front of the breast. Three herring-bone indents in front of spatula-shaped tail.

It is not possible to make a definite attribution to a school, though Zimmermann [1] would probably place it in his school of Phocis in Central Greece.

Kilian-Dirlmeier [2] puts this example in her "Corinthian-type" group, on account of the profile of the base, and more particularly under variant 3, for it has a rib below and three ribs above the spherical pearl. We agree with her grouping for nos. 973, 974 and 975 (the present example).

This duck might be a Peloponnesian [3] product from Sparta, Tegea or Argos, and if so, is to be dated between Late Geometric I and II, c. 725 B.C. This would be in keeping with Rolley's contention that all the types have a common Peloponnesian origin and were later imitated in the North [4]. But it is more likely to be from Central Greece [5]: Phocis, Locris, Boeotia [6] or even Northern Greece, Thessaly [7], whose production often takes after Central Greek or Peloponnesian types and lasts over a longer period; in this case it would certainly not be before the end of the 8th century and possibly already in the 7th.

Exhibited and Published:
Das Tier in der Antike, cat. no. 151.

2 Kilian-Dirlmeier, I.: PBF XI, 2, p. 1 adopts J. Bouzek's (Eirene 6, 1967, p. 115 ff.; 9, 1971, p. 89 ff.) terminology "Corinthian and Central Greek bird-type" and she goes on to say that it is conventionally applied in literature, though it does not point to the provenance of the individual bronzes, that there remain difficulties and uncertainties in establishing types determined by regions, place of production or stylistic particularities. Cl. Rolley, FdD V2, 1969, p. 90 ff. refutes Bouzek's classification.

7 For a similar example though coarser, with the tail higher than the head, whereas on ours it is lower, and on a disc instead of a pyramidal base, but with identical central shaft, see from Pherai, Athens National Museum 8279: Biesantz, H.: Die thessalischen Grabreliefs (Mainz, 1965) pl. 54 L 73 top right.