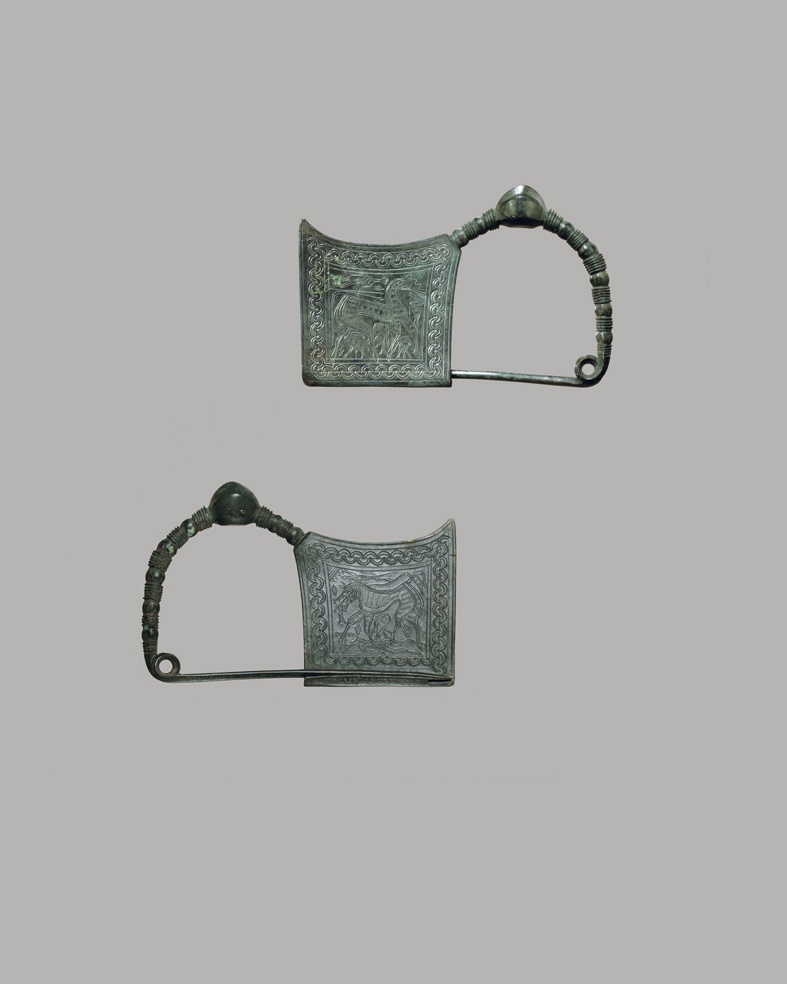 Cast and hammered; filed, engraved, punched and chiselled in the cold.

Condition: patina greyish green to pale green and a few spots of light green. The pin complete but broken at the hinge. A small section at the end of the upturned lower edge of the plate missing.

The fibula with catch-plate is the ancient safety pin, and as such a major improvement on the plain pin; the earliest examples go back to the Late Mycenaean period (13th-12th century B.C.) and were probably a Mycenaean invention [1]; from the time of Ripe Geometric onwards, locally characterized types developed.

The catch-plate is incised with scenes:

- on the obverse a prancing horse, its body covered with engraved tremolo [2] patterns, above its back horizontally depicted a standing hunter holding two spears, the remaining surface covered with four water-birds and two lozenges; the corner above the horse's head engraved with parallel lines and a row of triangles of uncertain significance [3]; the whole framed by two parallel lines followed by two opposed rows of double semi-circles with central dot on a dividing line;

- on the reverse or pin side - a lion with six huge fangs, long tongue, his body likewise covered with engraved tremolo patterns, is about to ingurgitate the head and neck of a man, whose corpse and two spears are figured horizontally above the monster; between the latter's legs a fallen hunter lies; two water-birds and three lozenges fill the spaces; the upper left hand corner likewise engraved with oblique lines and a row of triangles; framed as on the obverse though the lower side is different because of the pin's emplacement, for here we have a double line of which the second is dotted with an outer row of double semi-circles facing inward and bordered on the exterior by a single line. The upper edge of the plate curves in, the upturned lower edge forming a groove for the pin (an explanation for the name "catch-plate") is engraved with a line of overlapping semi-circles with central dot on a single line.

The bow or stirrup is arched with at its centre a large faceted pearl flattish on the underside, and ornamented from the plate to the hinge with alternating beads and sections of four to six disc mouldings. The hinge is rhomboid in section, engraved with a line [4] on the two upper facets, attenuating as it tapers down towards the point.

The function of the catch-plate fibulae was utilitarian and decorative, they were used for woollen clothing (Herodotus V, 87) and they are found in houses, tombs and as votive offerings in sanctuaries. Small examples such as ours were made to be used, and were then often dedicated, the purpose of the very large examples was probably only votive [5].

The workshop is in all likelihood Thessalian. The type of engraving, the depictions and the framing of the scenes is different on Boeotian examples. The wide frame, the filling of all the spaces (even the bodies of horse and lion with the tremolo pattern), the features of the figures and animals, are all typical of Thessalian work [6]. Though we have an example from Tegea [7] and another from Olympia [8] that bear some affinity, these are not sufficient to justify a Peloponnesian origin.

The same, in our opinion, holds true for the odd example from Elateia (Phocis) [9] .

4 At the very beginning of the hinge the inside facet is engraved with two lines which merge into one by the second coil.

6 There is a group of related fibulae, Early Art in Greece. The Cycladic, Minoan, Mycenaean and Geometric Periods, 3000-700 B.C. Münzen & Medaillen, A.G. Basel; André Emmerich Gallery, Inc. (New York, 1965), nos. 98-101, p. 35: no. 99 for the engraving of the horse and the filling of the empty spaces and most especially no. 100, where on the obverse we have a comparable lion and the only example we have found of the row of double semi-circles with central dot on a dividing line on the other side of which face another row of double semi-circles likewise with central dot and placed in an alternating position in relation to their opposite on all four sides of the obverse of the catch-plate. There is another example with the same design on the lower border only (Megaw, A.H.S.: Archaeology in Greece, Archaeological Reports for 1963-64, JHS 83-84, 1963-64, p. 15 fig. 15: from Philia).