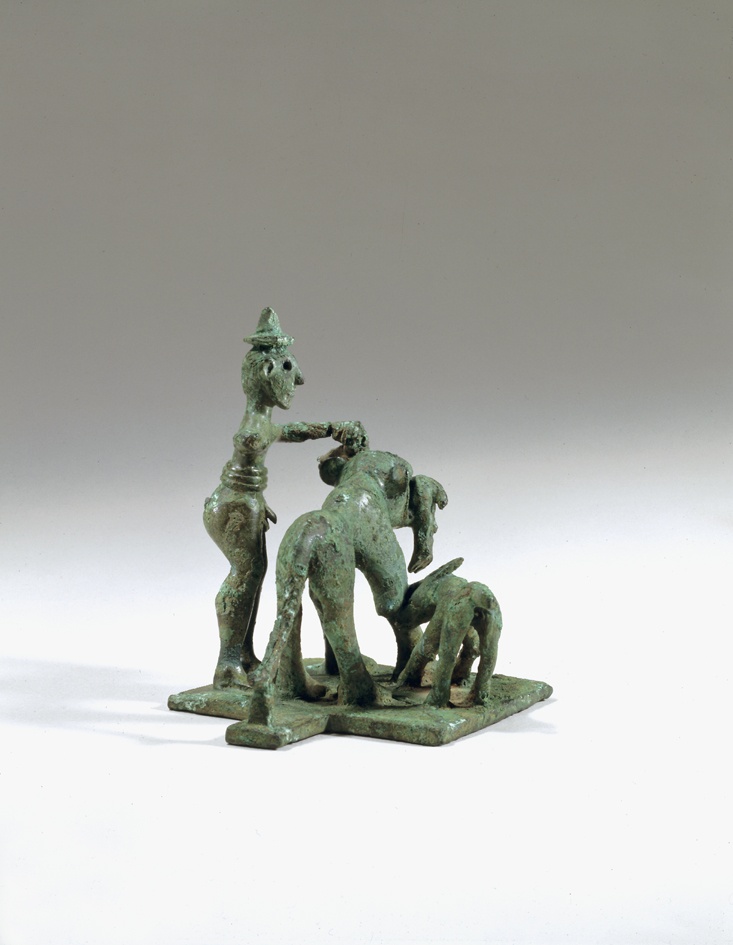 083. Group with Shepherd on Solid Base - Geometric

Solid-cast by the lost wax process. Carefully incised, polished and worked in the cold. The edge of the base is decorated with a double parallel line and the upper edge with regular notches; the eyebrows of the shepherd notched more naturalistically, and his hair indicated by horizontal zigzag lines is delimited at the nape by notches. The eyes of the shepherd and the lion may have been inlaid.

Condition: patina olive green partly incrusted with green chloride which has caused slight damage, a little reddish earth and on the left side of the shepherd's belt and buttock reddish cuprite with traces of iron. Missing: the right forearm of the shepherd and the weapon, of which a small piece of the shaft still protrudes from the back of the lion, the tip of his tail as well as that of the dog. A fissure through the left leg of the man above the ankle and his left forearm fractured at the wrist.

Peloponnesian [2] and probably Laconian as is also the bronze group found on Samos [3], a composition from the same workshop[4].

The relationship between Olympia, Laconia, Arcadia and Argos was very close in the Late Geometric period and cross-influences obviously considerable. The earliest of the three groups, the man and centaur said to be from Olympia [5], is considered to be Laconian on account of the similarity of the body of the centaur to Laconian horses and most especially for its typical Laconian base.

There is an affinity in spirit expressed in the subject matter, the confrontation between man and beast, and in details such as the hollow eyes and the headdress of the man, not to mention the general attitude, though the whole is both sharper and more static than our group, being of earlier date.

To be noted however, is its triple belt like the one on a nude warrior found in Olympia, ascribed to Argos, of similar date around 750 B.C. [6], like that of our shepherd. But our shepherd shows an affiliation with the charioteer from Olympia in Berlin [7] and the charioteers with parts of their chariots in Olympia [8], now ascribed to Laconia [9], for the general shape of the face (though the eyes differ), the hairline over the nape, the short thighs and the ankles and feet. These last three would seem to be products of a Laconian workshop active in Olympia.

Disturbing however is what this author perceived to be an Argive-type of decoration under the stand: a labyrinth made of the same rather deeply incised wide flat lines as under the base of the Mare (cat. no. 76 n. 7). Of similar execution and spirit of design is the swastika under the group found on Samos [10]. The famous bronze seal from Mersin [11] (Cilicia) with four swastikas underneath is done in a similar though less angular fashion. Since artisans worked in the same quarter, they must have taken over ideas from each other and for the present ensemble and the lion group found on Samos the Argive-type design surely adapted better to the shape of the base.

Notwithstanding the Greek debt to myths, ideas and artistic prototypes from the East, to be more precise in this case, the heroic struggle between man and beast, the swastika motif, and the headdress of the shepherd, there is no doubt that the lion groups are pure Peloponnesian products made in Olympia [12]: a Laconian workshop probably produced the present group though the possibility remains that an Argive [13] workshop may have done so.

The centre of our group is the terrifying lion with his jaws and fangs. Somewhat to the side appears a shepherd [14] whose greater height indicates his mastery of the situation as he tries to save the calf. If we imagine the missing forearm and short sword, we have a more homogeneous composition that reminds one of a semi-pyramidal construction as also in the other lion group.

In spite of a certain awkwardness, a masterly artistic and technical achievement for the period.

The author, pressed for time, ascribed the group with considerable emphasis to Argos, basing himself on outdated scholarship (B. Schweitzer et al.) and possibly over-emphasizing the importance of the motif on the underside of the base. We are grateful to Prof. W.-D. Heilmeyer for telling us verbally in June 1994 that the group is Laconian because fragments of unquestionably Laconian horses belonging to very similar charioteers have been found in Olympia (Heilmeyer, W.-D.: OB IX, 1994, p. 195 ff.).

2 Cl. Rolley (Les bronzes grecs, p. 58) endorsed this attribution, though dating the group in the last quarter of the 8th century B.C.

4 The figures of our shepherd and the shepherd or warrior of the Samos group bear striking resemblance: hollow eyes, same mouths, originally same profiles, similar build, etc. The lions' paws and claws are identical and the dogs very similar. Though the compositions are somewhat different and placed differently on the stands, both they and the designs underneath the bases are similar. For the base of the group found on Samos, see Bol, P.-C.: StädelJb N.F. 10, 1985, p. 11 fig. 10.

9 See above for change in attribution. Formerly ascribed to Argos by Schweitzer, B.: op. cit., p. 147.

11 Oxford, Ashmolean Museum 1892.1420: Boardman, J., Vollenweider, M.-L.: Catalogue of Engraved Gems and Finger Rings, I Greek and Etruscan, Ashmolean Museum (Oxford, 1978), no. 3, p. 2, pl. 1. A Greek work, though ascribed possibly to East Greece; it has led some also to attribute the two lion groups to an East Greek workshop (since one of them was found on Samos).

14 J.N. Coldstream on a visit on 8 September 1993 suggested possibly an early representation of Hermes, in his role as protector of the flocks and on account of his pointed hat.