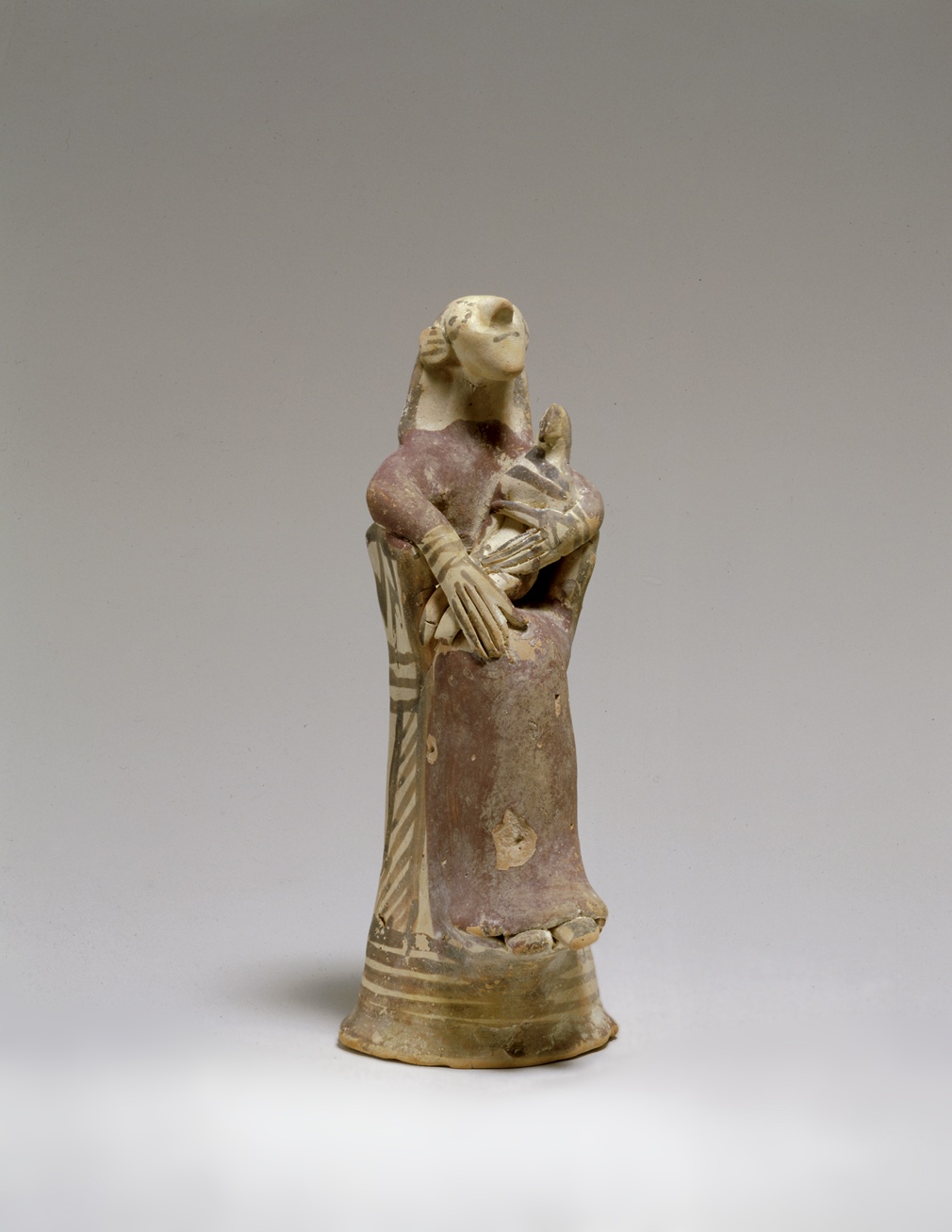 Modelled in clay, painted and fired. An instrument, probably a wooden spatula, used to incise the fingers of the hands and to mark certain other details. Some parts of the surface smoothed.

Condition: one or two chips with slight flaking and wear to part of the painted decoration.

The facial features of mother and child, her hair, hands and slippers, the "stair" and the "crenellated meander" patterns of the seat as well as its concentric circles and horizontal lines are a black glaze that turned to a reddish, rust reddish and brown to light brown colour due to the firing. Her long-sleeved dress painted a matt purple, partially incrusted with a limestone film.

Dressed in a long garment with sleeves and wearing slippers, she is seated on a high throne, a hollow cylinder, narrowing as it rises from its base, with a platform for foot-rest, the seat section of squarish shape slightly flaring out and closed on three sides. She holds her child across her lap and against her breast in a loving and protective manner.

In 1960 this figure was ascribed to Boeotia, on account of its general appearance, the painted decoration and the cylindrical lower part of the seat, similar to the tubular Boeotian mourning figures of later date.

P. Kranz in his first publication adopted this attribution. In a second, more detailed study he places her between the Late Geometric Attic terracotta charioteer from the Agora and the Early Proto-Attic terracotta funerary chariot from Vari. In his words, "the consistency and the colour of the clay as well as the colour of the varnish and the painting do not speak in favour of a Boeotian workshop" [1] . Further, he feels that "the rendering of the hair and the face with its large almond-shaped eyes, the prominent nose and the narrow mouth above the heavy chin distantly recall figures on Proto-Attic vases of the early second Black-Figure style" [2] .

A definite attribution is not possible since many of the finds from Attica - Brauron, Eleusis and the Acropolis - still await publication.

In conclusion, the writer feels that to decide with certainty between a Boeotian or an adjoining Northern Attic workshop for this unparalleled sculpture is too speculative.

However, if the date of 700 B.C. or shortly thereafter is accepted, Attica is indeed a strong contender, though a later dating towards the end of the century would tend to indicate a Boeotian production.

Worthy of note is a certain delicacy - one might say almost refinement - expressed by the modelling of the shoulders and upper arms which rest tenderly on the sides of the seat, revealing a motherly protectiveness.

In all probability found in a tomb, she represents a Mother Goddess with child, a fertility figure propitious to the afterlife, a good spirit to protect the deceased. She may have fulfilled the same function in a votive context.