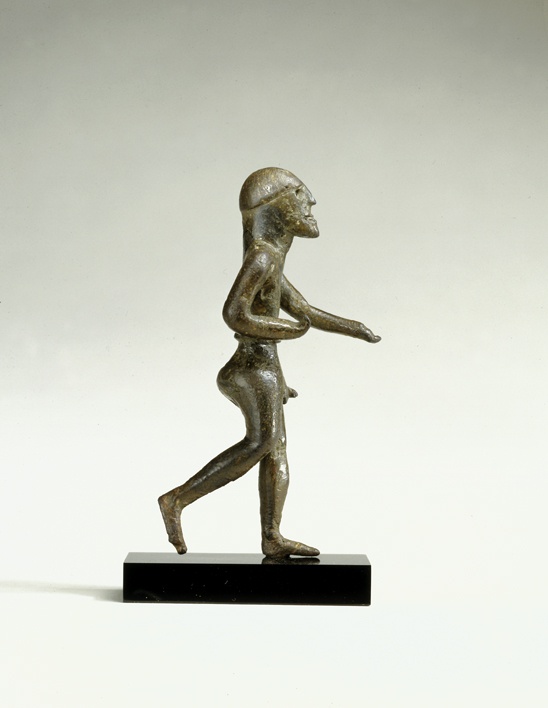 Solid-cast by the lost wax process and worked in the cold. A tang under the left heel for affixing.

Condition: patina dark brown, earthy colour with casting imperfections owing to poorly fused metal or too rapid a cooling down, as evidenced by fillings at the lower back of the neck and the middle of the chest, faulty casting on the raised right foot with most of the toes missing. The left leg from the knee down bent out of position and the left arm slightly bent inwards.

This statuette exemplifies, with its highly rhythmic vitality, the transition from the static to movement in a most imaginative creativity as it evolves from the immediately preceding Geometric period. Because of his liveliness and his having been mounted too high off the stand, he has always been called a running man.

Comparison with the centaur on the crater, cat. no. 86, is striking both for their similar spirit, and dynamic stance, and certain features, such as the pointed head and face, and the triangular torso.

There are parallels however:

a Cretan bronze figure in London [1] which is very similar as to its belt, triangular torso, buttocks, though these are slightly less prominent and pointed. It finds a parallel for its hairstyle in a statuette from Kato Syme Viannou [2], dated in the 8th century B.C., which appears to have a pointed face like our bowman.

For style, our figure is comparable with the painting on a pinax from Praisos [3] and the mitra from Rethymnon [4].

There are interesting precedents in late Geometric pottery, one example of which [5] may help explain what our figure was holding. It may have been a bow in the left hand, the right hand drawing back the bowstring with an arrow, as might be indicated by the notch in the middle of the mitten-like upraised fingers.

For a similar happening, see cat. no. 200, though the bowman in a slightly different position is balancing on his right leg and resting his right hand, holding the bow, on his upraised left thigh.

In all likelihood a votive offering possibly representing Apollo, Herakles or a hunter.