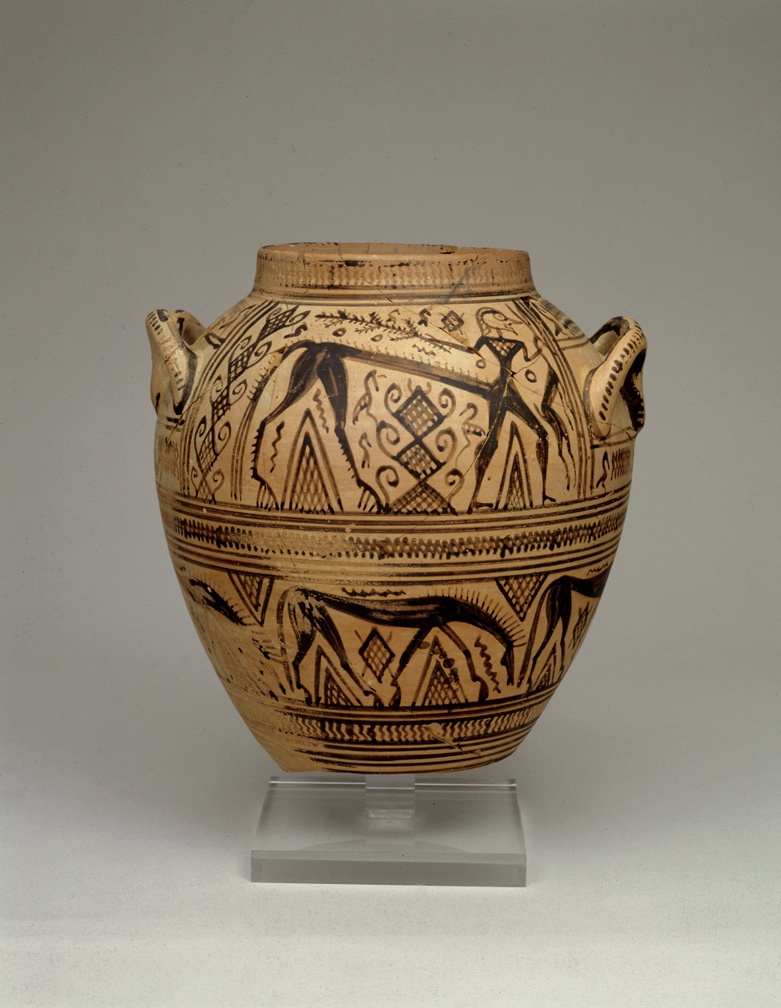 Condition: yellowish-beige clay with tinges of ochre in places; the painted decoration very dark brown to lightish brown. The foot and lid missing (unfortunately, fragments of a lid which Beazley said may have belonged, and probably did, have since been lost).

The centaur, who will normally appear henceforth with a horse's body and hindquarters, is here unusual in that his backlegs end in lion's paws.

The abstract design behind him represents a Tree of Life which on the other side is replaced by three superimposed birds. The lower zone is decorated with grazing horses save for one walking with upraised head.

The handles of the crater in the form of large stylized horns.

Beazley, in 1951, wrote about this vase as follows: the crater "gives us our first view of a figure which barely appears in the Geometric period but which is very popular in the Proto-Attic, and remains so, woven into legend, throughout antiquity - the centaur [2]. Here he returns gaily from the chase, a branch, his usual weapon, in one hand, a deer in the other. Long thin barrel; bristly back, tail, and hind-legs; large head and eye; open mouth; long sharp nose and chin; wavy hair. The face is drawn in outline, with more detail than in any of the vases we have looked at so far. A plant is seen beside him, another between his legs; birds perch and float. It is tempting to guess that the other ingredients of the picture are not mere filling-ornament but represent real objects: rocks, stones, serpents or worms :

Below, an old subject, horses grazing, but with a grand new swing from ear to rump. The vase is fragmentary; the missing parts of the body, and the lid, can be restored after a complete vase of the same shape and very much the same style, but far inferior, in Cambridge [4]. The Cambridge horse looks like a broken-down version of the Broomhall."

K. Van Gelder calls it Proto-Attic and points out that the painter is forward-looking. J.N. Coldstream, in his latest assessment, considers it to be transitional and as in the heading. A definitive assessment is difficult but there can be no sharp division; the end of a period embodies the beginning of the next which, in turn, retains remnants of the past. The painter is creative at this transitional moment, whether the vase [5] belongs to the last decade of the 8th century or the first of the 7th. Whether the date still be in the 8th, the spirit is Proto-Attic of the early 7th.

1 In the Russian catalogue, it appeared as Proto-Attic, 700-690 B.C. In the catalogue for the Royal Academy, Attic Late Geometric IIb, 710-700 B.C. After the very thorough article by Van Gelder and further correspondence with J.N. Coldstream, we have settled for the above date.

2 The pupil of the centaur's eye is slightly damaged. The picture on B is similar, but birds take the place of the plant on the left. Below, five full-sized horses and under one of the "goat-horn" handles a small one...

5 The author refers to this vessel as a crater for Beazley does.
It is to be noted that its inside is the natural yellowish beige clay and that it had a lid.