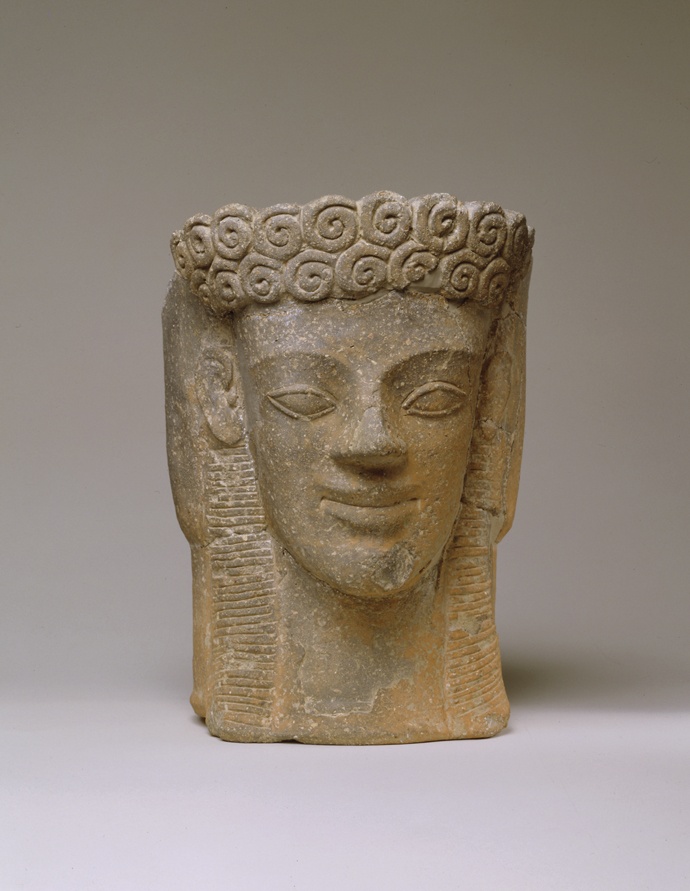 The head vase as a form comes from the Near East and Egypt. Dedalic Art is the arbitrary term given to a Dorian Creto-Peloponnesian art style of the 7th century B.C. Though the centres were Corinth, Rhodes, Crete and Sparta, the leading workshops from which the influence spread were on Crete.

The basic form was first turned in two sections, upper and lower, on the potter's wheel; a side section was then cut out and the facial mask, made in a mould, was applied; also applied were wet strips of clay which were hand-worked with the help of a spatula into hair tresses and ears; the curls above the forehead were made in the same way; the whole was then covered with a thick slip and fired.

Condition: restored from pieces, the major sections of considerable size. The back of the head and the mouth of the vessel are missing. Minor plaster restorations, tinted but clearly visible. Chip to the chin and the slip in parts flaked off.

The grainy, reddish-brown clay turned grey in many parts.

We do not know its function, but its artistic quality precludes it from being a domestic vessel. It must have had its place in a sanctuary as a cult object or ritual vessel.

The closest parallel is the head vase from Arkhanes in Herakleion [1] (there may be confusion here and it may too have come from Arkades /Afrati). Probably from the same workshop but certainly not by the same artist.

The head vase under discussion is to be placed in the broad context of Dedalic development: preceded by the Dame d'Auxerre [2]; almost contemporary with the bronze kouros in Delphi [3] and the stone head from Mycenae [4] and probably slightly before the considerable production of large terracotta relief pithoi which have close stylistic affinities with it and for which Afrati was a major production centre.

Further comparisons can be made with Corinthian, Laconian and Rhodian works, whether of stone, bronze or terracotta; the last often small terracotta vases.

Finds from centres in Crete such as Gortyn and lesser finds at Astritsi, Axos, and Phaestos [5], help to fill in the picture of a distinguished contribution to the development of Greek Art.