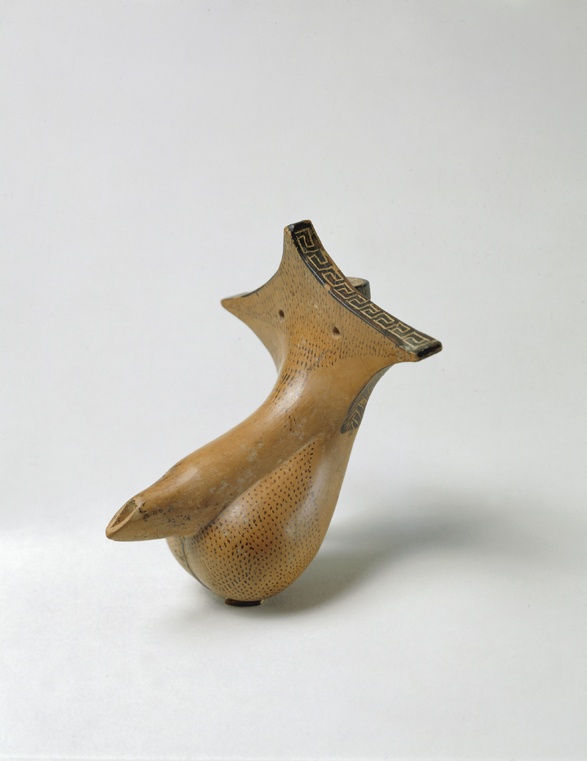 Plastic vases, mass-produced between the end of the 7th and the middle of the 6th century B.C., were extremely popular and exported throughout the Greek world and beyond.

Corinth and Rhodes were two of the most important centres of production.

Used as recipients in the trade of scents or scented oils, they were also appreciated in their own right as precious objects on account of their humour and charm.

The motifs were a function of various factors: religious use, funerary or chthonian purpose, folkloric ideas, or simply and most often because picturesque and responding to the fashion of the day.

Plastic vases, produced with considerable care and artistically superior to the terracotta statuettes of the period, were made either using two moulds, the ridge of the join removed afterwards, or turned on the wheel.

The majority were in terracotta, decorated with black, red or brown paint, fired and then occasionally incised. The faience examples were glazed, painted decoration added and fired.

Condition: tip of triangular section on left, where pubic hair painted, once broken and reattached; a crack with some chipping, behind scrotum and across back, repaired.

Three very close comparisons with only slight differences in the colour scheme of the painted decoration are: a vase in Copenhagen of almost identical size [1]; a British Museum example with member missing [2]; a vase in a private collection in Berlin, also incomplete [3].