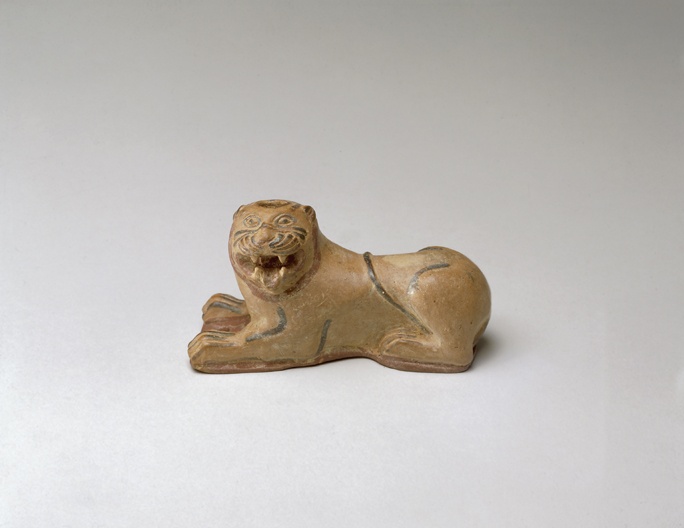 Condition: decorated with black glaze and matt purple paint, the terracotta, though seeming to be orange-brown, may have been originally yellowish-brown (the colour of the kernos). The opening - a hole on top of the head - and the plaque under the lion - a suspension hole between the two paws - painted matt purple.

A very close comparison is the lion on the kernos found on Samos [1] which Vierneisel unequivocally ascribes to a Samian workshop, the most important argument being that the clay is Samian.

Though our lion is a free-standing plastic vessel and the one on the kernos is part of a composition, they are both very similar, almost identical as to all details, save that the Samian example has his front left leg and paw slightly curving up and is somewhat weathered. Possibly the same hand made them both, or the figure on the kernos is inspired after ours (notwithstanding Ducat's [2] remark as to a model), though the contrary is possible, or maybe they both hark back to an unknown prototype. If our lion is Rhodian, the artist who made him could have travelled to Samos and made the kernos "in situ" unless only our lion or its pendant found its way there.

We are not in a position to assess the similarity or dissimilarity between their respective clays.