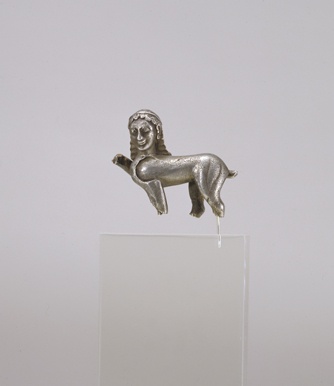 The body and the head with hair solid-cast separately in silver and joined; possibly also made separately the right upraised leg and the tail, inserted and annealed. Two wings (now missing) silver gilt with gold foil fashioned apart and attached as shown by the groove around the left shoulder and remains of a wing beneath the hair at the back. The whole with considerable and delicate chasing in the cold, burnished throughout.

Condition: the surface nicked here and there, wear to the left eye and tip of nose. Missing also the lower four legs, the tail. The left hind leg fissured and cracked at the hock.

The sphinx, a creation of the Near East, made its first appearance in Greece during the Mycenaean Age to reappear later towards the end of the Geometric period. It decorated painted pottery, surmounted marble grave stelai and ornamented different types of objects. Small figurines made of silver are very rare in the archaic and classical periods; most appear to have served as attachments to vessels or other objects. However, the pose of the present sphinx is highly unusual and she is an enigma as to her place of origin and function [1].

The author sees in her strong Ionian influence though she bears a resemblance to various works from different regions. The subject was favoured on the rim of Clazomenian sarcophagi [2] often with a front paw upraised, as here, an eastern characteristic, and the way the hair bunches behind the nape of the neck and other details seem comparable with the sphinx on the sarcophagus in Chapel Hill [3]. There are the walking sphinxes with one paw upraised on the frieze of a silver aryballos from Vani [4], surely East Greek, though later in date, c. 500 B.C. Also two solid silver sphinxes with heads turned, sitting on their haunches, front paws extended and joined, on the rim of the bowl of a kyathos of Lydian-Achaemenid manufacture from the Lydian treasure formerly in the Metropolitan Museum [5]. There are sphinxes in repoussé on a damaged gold strip from Ialysos on Rhodes [6]. Others on bronze shields and strips from Crete, still within the end of the Geometric period, are among the earliest representations in Greek art since the Mycenaean Age. Striding sphinxes with all four paws on the ground are depicted in repoussé on a bronze shield in Delphi [7]. Bronze sphinxes in the round were an adjunct of ornate mirrors usually from the Peloponnese, as for example the two sphinxes on the shoulders of a Kore mirror handle from Corinth [8] and on mirror discs such as one in Copenhagen [9]. On both these the back feet are joined as the sphinx rests on its haunches with the right front
paw upraised.

They often figure on top of grave stelai of the 6th century. Two little sphinxes, one in bronze and one in silver, are seen on Ionic capitals in the Bastis collection [10]. They both, in the author's opinion, surmounted long pins. However, both are sitting on their haunches, front and back legs joined.

To go on enumerating sphinxes will not supply the answer. However, the marble head of a sphinx from Thasos in the Ny Carlsberg Glyptotek [11] offers a nice parallel for the wavy hair over the forehead and particularly for the way it dips behind the neck to fall on the shoulder ending in sort of tufts. The contours for the eyes are similar. In conclusion, the present work is probably Ionian.

1 For a discussion, see Hoffmann, H.: The riddle of the Sphinx: a case study in Athenian immortality symbolism, in: Morris, I. (ed.): Classical Greece: ancient histories and modern archaeologies (Cambridge, 1994), p. 71 ff.