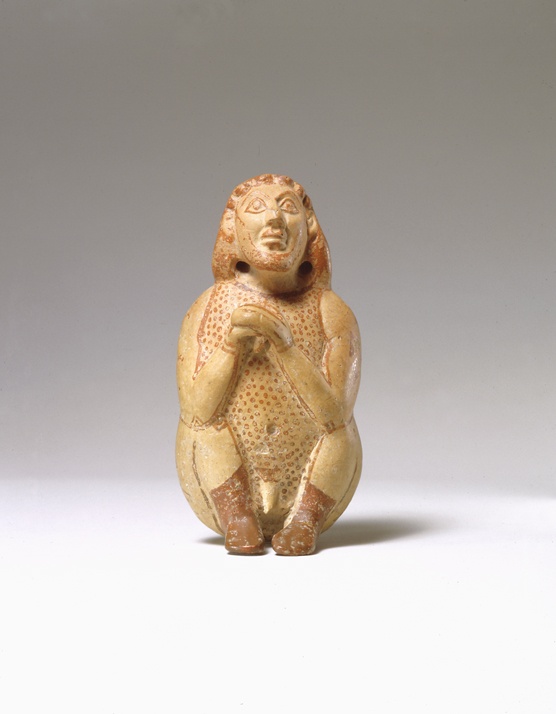 Condition: Corinthian clay, his back, shoulders and thighs decorated with painted floral motifs, his right thigh with a winged six-legged insect - probably a wasp. The painted decoration in red, matt purple, reddish brown. A lot of it on the beard and hair worn away.

The tip of the penis missing; his back slightly chipped. Two holes for suspension on either side of the neck.

This representation may be of an actor in the guise of a satyr in a favoured squatting position, or it may allude to a man defecating and hence be a joke as the vessel was used as a scent bottle.

Demons whose act of crouching symbolized their ties to the earth could have a certain association with satyrs.

A popular subject, there are many similar examples; such is a comast from Perachora [2].

Compare the faces on other representations from the same workshop: sphinxes in the British Museum and in the Louvre; one in Berlin possibly by the same hand; but especially a siren, the face probably modelled by the same artisan .

The comast and the hare, cat. no. 103, could be from the same workshop, and the similarity in the way the openings are made on top of the heads might indicate the same hand. Possibly, they were both painted by the same artisan. Moreover, they are said to have been found in the same tomb. However, we have no indication as to whether such vessels were made and painted by the same person.

Wallenstein's publication was unknown to the author when he wrote this entry for the Royal Academy exhibition catalogue.

3 K. Wallenstein's asserting that a widespread head-matrix was used for the making of sirens, sphinxes and comasts reinforces the author's observation that certain other faces belong to the same workshop.