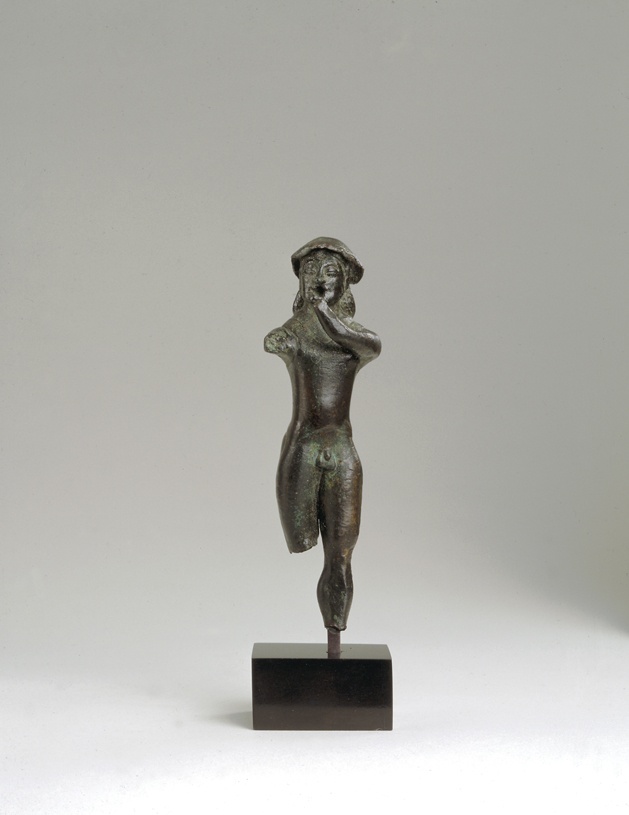 Condition: a large hole in place of the mouth with indents on either side (to receive a wide mouthpiece enabling attachment of the phorbeia which kept the musician's cheeks from puffing out). The flute, phorbeia and mouthpiece missing, as well as right arm, left hand, right leg from below the knee and left foot. Great pressure has flattened the left thigh on the left front and the right thigh on the back right. Hair over neck and back very worn.

The only close parallel is the youth on galloping horse in Boston [1], dated c. 520 B.C. and said to have been found in Thessaly.

Kunze [2] sees a plausible relation to Corinth on account of the horse, and Vermeule suggests "Leukas, a leading Corinthian colony on the western mainland" [3].

The sculptural tradition of these pieces appears to be that of the Tenea Kouros, a generation or two earlier, and like him they express "the Greek feeling for life and movement"[4].

Dressed in tight-fitting tunics, they wear floppy petasoi, the hairline over the forehead is very similar, as is the pointed nose and the shape of the face. The ears are comparable and the hair, though different, has a certain wig-like appearance on both.

They exhibit a tight, compact corporeality, with the flute-player expressing some Ionian influence. His eyes are different since they are half closed in mystical ecstasy as he plays his flute. In view of the similarity, the flute-player may be either a product of a North-East Peloponnesian workshop or of a school strongly influenced by this region [5]. He probably represents a shepherd.

5 There may be a vague resemblance, since only seen from the drawing, with a bronze cut-out plaque representing a votary, dated slightly earlier, from the Syme sanctuary on the southern slopes of Mount Dikte in Central Crete, not too far from the Messara plain (Lembessi, A., Muhly, P.: Aspects of Minoan Cult. Sacred Enclosures. The Evidence from the Syme Sanctuary (Crete), AA 105, 1990, p. 327 fig. 16).