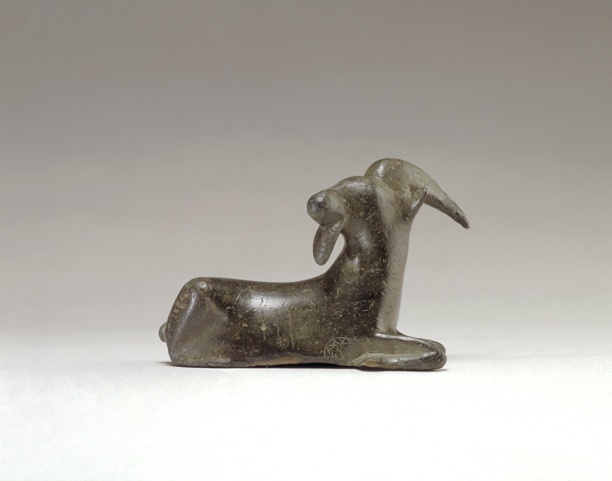 Condition: patina a dark olive green, flaked and scraped here and there, the metal showing through on the middle lower front edge, on the right paw, on tip of horns and ears. Missing: small section below the tail, the rod surmounted by a rivet head that would have closed the hole on the neck and served from the inside to attach the goat to the rim of a cauldron with the lead filling [2].

This reclining goat and the following three, cat. nos. 108, 110, and 111, and the lion, cat. no. 109, were attached to the rims of cauldrons or craters, embellishments fashionable in the second half of the 6th century B.C. The author is particularly fond of these goats, acquired in his early years of collecting, for somehow they embody humanism, and with the Greek tiller of the soil, who was also a shepherd, they shared a particular affinity. We used to feel they conveyed the spirit of the region where they were produced, but over the years have come to realize that to attribute them to definite regional schools is, within our present knowledge, in many cases problematic. However, since Sparta and Corinth would appear to be the main production centres for large bronze vessels of the period, it is more than likely that many of these goats should be given to them. Most scholars seem inclined to favour Corinth for a great many of the surviving examples. Central Greece, Boeotia, and Northern Greece: Thessaly and Macedonia in the east, and Epirus in the west, surely also produced their versions.

The present example, the first we acquired, is without a provenance.

2 Though possibly some may have been attached by a rod alone; there are examples of goats and lions that were filled with lead and only attached with the help of soldering, others, as in this case, with a rod surmounted by a rivet head (see cat. no. 111).