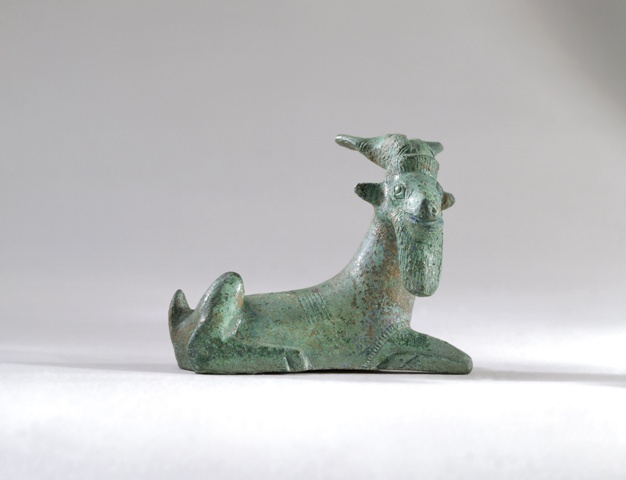 Made as previous example, cat. no. 107 [1], and still filled with lead as fitting for recumbent animals attached to cauldron rims.

Condition: patina a pale to bright emerald green. The surface granular in places such as the face and goatee, and with earth incrustation. Traces of solder on the underside. Metal showing through on tips of horns.

This spirited example was once attached to crater no. 69 from the necropolis of Trebeniste [2]. There is no doubt that it is by the same hand as the other remaining example still on the shoulder of the crater in Sofia which the author personally examined. The only difference between the two goats is their size, the one in Sofia being slightly smaller (6.8 cm long, 5.3 cm high). We have always thought it was the product of a Corinthian school somewhere in North-West Greece. However, C. Stibbe [3] considers the treatment of the fringe on the forehead and the beard as characteristic of Sparta, as also, we think he said, the hatching on the hindquarters indicating hair. Cl. Rolley [4] calls the above-mentioned Trebeniste example a rather close parallel for a reclining goat in the Statathos collection, with which we see no similarity save for the species, the function and the always repeated position. E. Walter-Karydi [5] says that our goat belongs to the circle of Dodonan art. W. Gauer [6] concurs that our mountain goat is to be ascribed to Corinth. We consider that it belongs to a North-West Greek Corinthian school, but in this case from exactly where is uncertain.

1 Though without a hole for a rivet-headed rod to secure to vessel but, under the extended forelegs, channels with remains of lead filling to help do so.

3 In a verbal communication on a visit in November 1993.