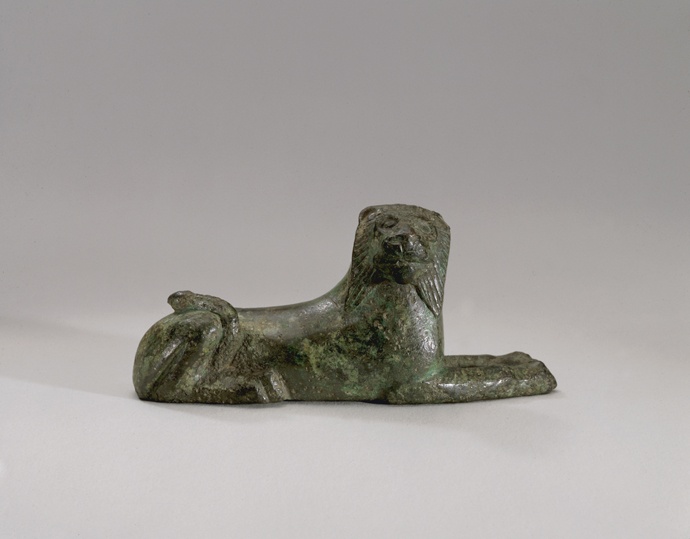 Condition: patina olive green with varying shades of bright green and greyish green. The surface generally smooth, somewhat pitted here and there, with slight abrasion to face and top of hair. On the back of the head the mane only indicated by two locks. A scrape on upper left flank.

We had always ascribed this reclining lion to the Corinthian school indicating as provenance Perachora (?) by comparison with two lions from Perachora, dated [2] probably in the third quarter of the 6th century, thus inferring that there might have been a local workshop there. It would seem to be reminiscent of the tradition of Corinthian plastic vessels. H. Gabelmann [3] says that in the second and third quarters of the 6th century regional differences appear in lions and there emerges a "Mainland Collar-Type" which he ascribes to Corinth, a new type developed in the Peloponnese "characterized by a crown of tufts of hair encircling the head like a halo of tongues of fire". Our lion fits what he says is the fuller and wider modelling of the faces, with less stylization, characteristic for this Corinthian development. Th. Karagiorga [4] considers that certain characteristics such as the soft homogeneous roundness of the surfaces, producing a relaxed and fluid feeling throughout the figure, is found in Corinth in the minor arts such as lion figurines, mentioning ours among others as being an example, though she dates it much earlier in the century.

1 Along the underside of both of these a shallow channel once filled with lead to help secure to the vessel.