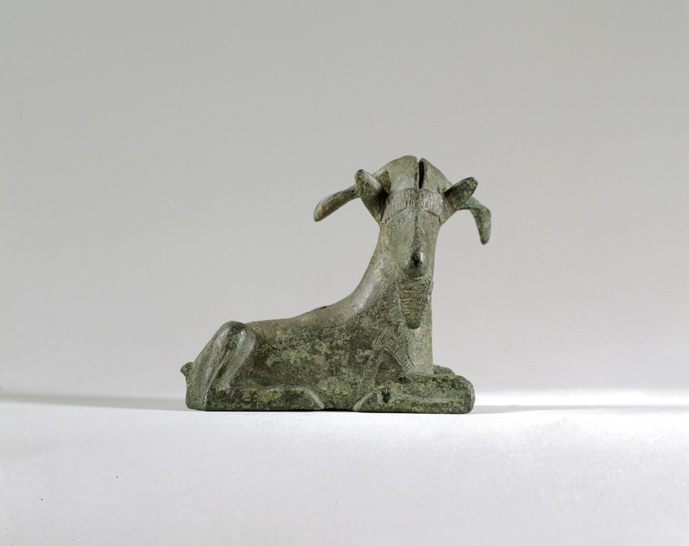 Made as cat. no. 107, but the hole filled with the rivet-headed rod for securing to vessel still in place through middle of back (down through the lead filling).

Condition: patina irregular and splotchy, varying shades of greyish green and metal undertones here and there. Surface rough in places with green chloride incrustation and earth deposit. A casting fault at the back on the middle of the neck next to a scrape mark. On the underside the rod cut off and lead around it hollowed out [1]. Tail damaged and partly missing. Metal visible on tip of left ear and a small nick on upper left side of goatee.

As with the preceding goat, we have no satisfying comparison. However, he is sturdy, rough and uncouth and indubitably belongs to Northern Greece, characteristics appropriate for this region in the 6th century B.C. Every time that we look at him we are reminded of the three hundred brave and hardened Macedonians who, some two centuries later, near the modern Hissar on the Koh-i-nor mountains, volunteered [2] to climb at night, in the winter's snow and cold, a rock face unguarded, since it was considered unsurmountable, and thus enabled Alexander on his march to Taxila to overcome the Sogdian citadel that held up his advance.

This he-goat exemplifies what we expressed in the entry for cat. no. 107, epitomizing the spirit of a region, exuding a similar roughness to that of the Macedonian volunteers who helped carry the day for Alexander.

1 Probably a modern attempt at removal.

2 Lane Fox, R.: Alexander the Great (London, 1973), p. 315 ff.; however, Alexander had announced that the first to reach the top "would receive twelve talents, twelve times the bonus paid to allied troops for four years' Asian service; the rest would be paid according to their position in the race to the summit."