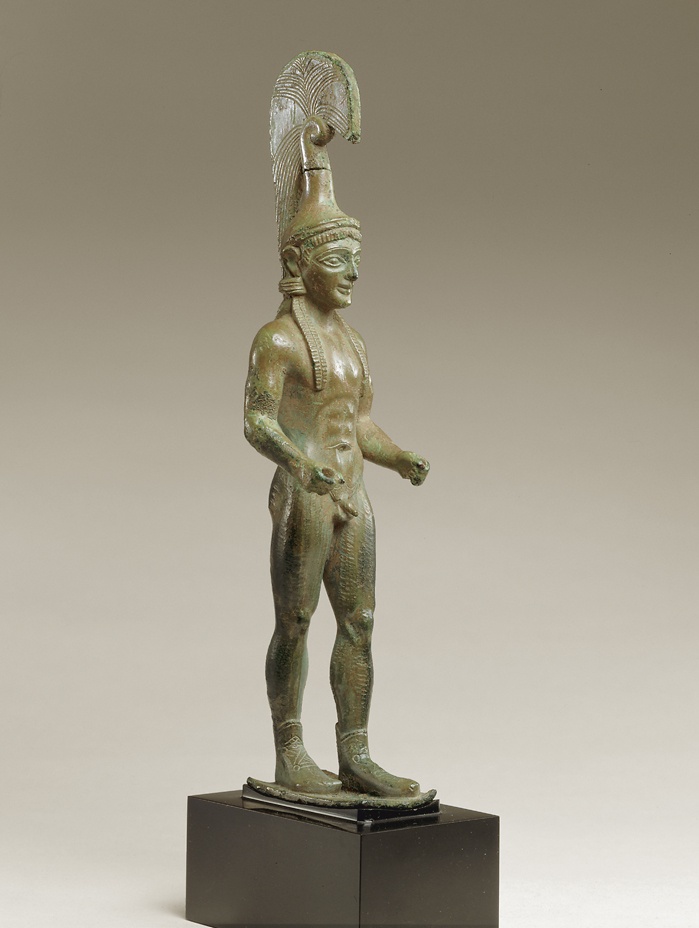 112. Youth in Helmet and Boots - Archaic

Solid-cast by the lost wax process and carefully worked in the cold with delicate engraving and chasing.

We know of no valid comparison for this youth which would help either to explain him or to locate his school.

He is not an ordinary warrior, for in addition to being naked, he wears boots and a helmet.

His footwear is interesting, various elements represented realistically but combined in an unrealistic fashion. The low boots are of the endromides [2] type, soleless and of soft leather, the shaft reaches to the calf with a wide V [3] above the ankles. The lacing and tongue are figured on the front of the boots for a decorative purpose, as though a gabled window - the lacing threaded through four eyelets that criss-cross with two simple ties. In reality they should reach to the top of the shaft to make the boots wearable.

His decorative Attic-type helmet is surmounted by an imposing high crest for which an interesting comparison is a Palladion [4] from Tegea in Arcadia, variously considered Laconian or an Arcadian imitation [5]. Though far shorter, the element supporting the crest of the Athena terminates in the same volute and the crest itself is very similar in shape, with the same pattern of horsehair engraving save for the part of the crest falling down the back. Also, the engraved circles on the volute and the edge of Athena's peplos are like the one above each ear on the helmet of our youth and for the eyelets on his boots.

We can draw no conclusions from the above though a distant rapport is probable.

Langlotz conjectured a Sicyonian school and by elimination this seems the most likely attribution for the youth, though one should not totally exclude the possibility that he was an unusual Attic creation.

He may have held a spear in each hand and represents a hero or athlete dedicated as a votive.

1 Father of George Ortiz and understandingly acquired at the latter's request.

2 For footwear in general consult: Morrow, K.D.: Greek Footwear and the Dating of Sculpture (Madison, 1985).