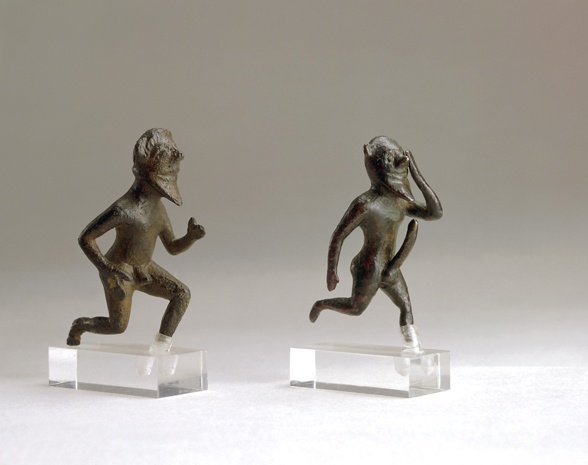 Solid-cast by the lost wax process with little working in the cold.

Condition: worn down as a pebble in the sands of a river bed, particularly noticeable on the right hand and foot. The left foot missing.

Sharing certain characteristics with his companion piece, cat. no. 113, manifesting lubricity and exaggeratedly ithyphallic, the quintessence of his species, he seems to be grinning with glee as he runs away, having been up to some prank, possibly molesting maenads.

Our satyr covers [1] his left eye in a pretense of decorum over his state and mischievous carryings-on.

Certainly from the same workshop as his companion - with similar shaped face and indication of the hair above the forehead; the ears, broad mouth and beard identical.

1 Though satyrs are not bashful, this gesture cannot be interpreted as an attempt at aposkopeuon, for the left hand does not act as a visor but is flat and completely covers his left eye.