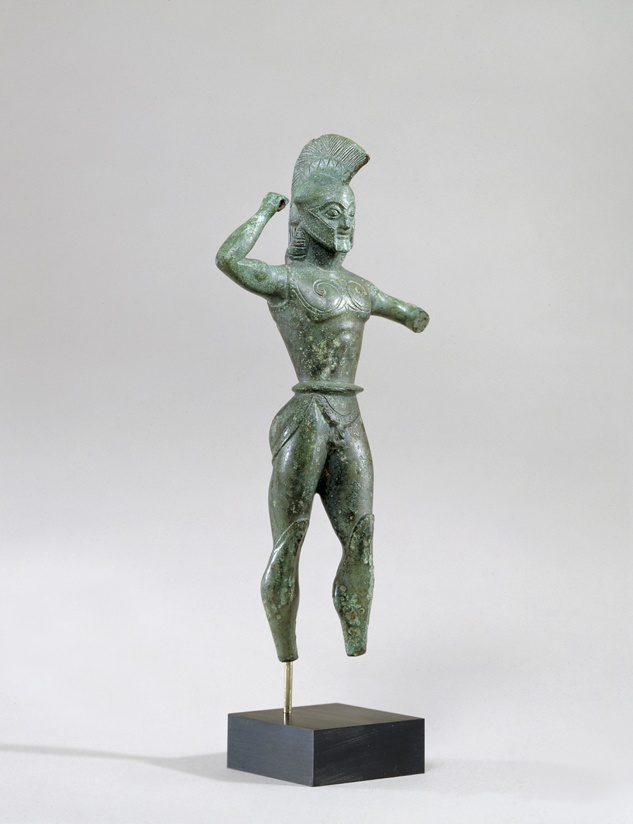 Solid-cast by the lost wax process with considerable engraving and chasing in the cold.

Condition: left forearm and both feet missing; deep casting flaw on the back of the hair with further casting imperfections on the back.

Light green to greyish green patina with some pitting and oxidization.

The hoplite was a subject for which the Spartans had a particular predilection; from the middle of the 6th century B.C. onwards it adhered to a certain type which was imitated by various regions of Greece.

This warrior wears a crested Corinthian helmet, a bell-shaped cuirass in two parts and greaves, as well as a short tunic that covers his buttocks and is scallop-shaped in front leaving his genitals exposed. He strides forward and formerly held a spear in his upraised right hand and a circular shield (the so-called Argive type) on his left forearm.

A very close comparison is a larger warrior in the Christos G. Bastis collection [1] which features engravings on the right side of the helmet: triangles, horse hair-like hatchings and different mouldings identical to those on the present example. Identical also is the palmette, lotus and volute decoration on the front of the cuirass; the dotted border of the tunic which does not continue on his left side and the dotted edge of the greaves which likewise is not engraved on his left below the knees. The same applies to the mass of hair which is only indicated with horizontal lines on his right side.

All these details, even down to the casting flaws, are so similar on both statuettes that they must not only come from the same workshop but be by the same artist and probably from the same votive ensemble, such as vessel and tripod, or the like. They are meant to be seen from the right side and from a three-quarter back or front view only.

For their manneristic and effeminate characteristics, these two warriors belong to a North-West Greek school, though they are in keeping with their Peloponnesian prototype, probably Corinthian [2]. Their expression and style place them in the late Archaic period and they should be dated around 525 B.C.