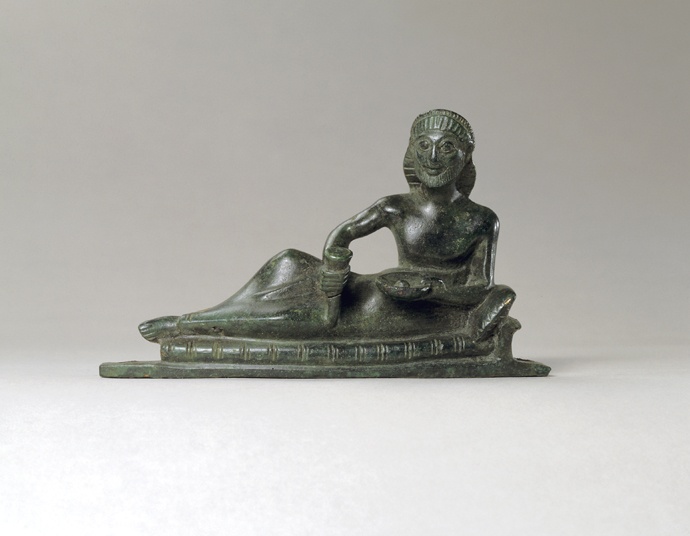 Condition: the metal strip on his left with traces of the hole for riveting broken off and in antiquity a new hole drilled in what remains (present overall length about 7 mm shorter than originally). The eyes and nose slightly flattened.

The banquet in Ancient Greece, whether intimate or with many guests, fulfilled an important social function, reserved for men - free women were not admitted, though female servants, musicians, dancers and courtesans were present.

Originally an eminently boisterous gathering given over to wine-drinking, the serving of food, entertainment, and accompanying music, it evolved over time into an occasion also for cultural intercourse: the reading of poetry, philosophical debate and other intellectual pursuits.

The smiling banqueter wearing a wreath is reclining on a kline [1], his left elbow resting on a cushion - the hand holding a phiale; a drinking horn in his right hand.

A remarkably close comparison is a banqueter in the Volos [2] Museum . They are very similar for some of the cold-working such as the two parallel engraved lines that terminate the drapery over the ankles, on the Volos example also what appears to be a zigzag or lozenge filling, similar to the zigzag lines on either side of the seam of their cushion. Their couches are identical and the mattresses of both decorated with groups of triple vertical strokes. Both pieces are very close in size and could come from the same vessel.

A good parallel is the banqueter in the British Museum [3], said to have been found at Dodona, usually ascribed to a Peloponnesian workshop, more precisely Corinth, and dated in the second half of the 6th century, though E. Walter-Karydi ascribes it to a local Dodona school [4].

He is substantial, of finer modelling and engraving and with a magnificent plastic flow; more sophisticated and spirited, beaming with humour, he is a superior creation to these slightly provincial examples, with their rather awkwardly upright position. But the British Museum banqueter has a valid claim to being the finest extant Greek bronze. He is also solid-cast, his couch is wider, imperceptibly curved with flat underside, and most likely once attached to a vessel.

By contrast, the present statuette is on a narrower curved couch - as is the Volos example - with the underside hollowed out [5], but on either side of both perforated metal strips project for riveting.

The great similarity and discrepancies between the three banqueters pose a problem. There is a contrast between the spirited expression of the British Museum banqueter - the plasticity of his body and drapery, and the simple rendering of the couch - with the parallels. The British Museum banqueter seems to show a neckline of a tunic, though he is naked from the waist up; Volos has a faint resemblance of a neckline (also slanting incisions on his left arm) and our example no indication. The British Museum banqueter rests his right hand on his right knee and in his left holds a solid-cast phiale with an engraved line for the inner rim to indicate depth; the Volos example rests his right hand slightly behind the knee and holds a rhyton in his left; and on ours the right hand holds a rhyton and the left an omphalos phiale. The three pieces differ for the tilts of their heads: ours with the neck slightly tilted forward but the gaze straight ahead, and on the British Museum and Volos examples the necks held straighter and the eyes gaze slightly up.

On the British Museum figure the mass of the hair down the back is admirably worked with the greatest detailing also over the forehead and on either side of the neck. The hair on Volos is trying to imitate the British Museum style though the cold-working is far less refined, especially so for either side of the neck, with on ours only simple horizontal strokes; over the forehead of the Volos a simpler rendering is similar to that on our example. The top of the head of all three is smooth, the mass of hair down the back is smooth on ours and we cannot tell for Volos.

The same artist could not have produced all three; but are the present example and Volos by a lesser artisan in the same workshop? More likely, they are imitations by an artist from a different school who saw and admired the ensemble to which the British Museum example [6] belonged, whether in a sanctuary at Dodona or thereabouts [7].

Our banqueter and the Volos example could be from one of several centres of North-West Greece, possibly a workshop at Apollonia on the periphery of Epirus, or from a Thessalian workshop inspired by the school that produced the British Museum banqueter.

1 In reality, klinai usually had legs which are never shown on bronze examples with banqueters made to be fixed to the rims of vessels.

5 For the present example and surely also for the Volos bronze, possibly for affixing with lead to a vessel rim.

6 To enable comparison, a metal analysis was carried out (at our suggestion graciously approved by Brian Cook) at the British Museum on the present example and theirs: and though the tin content was similar in both, the lead content on ours was far higher (17.5 against 10.7%) which, added to their different trace element patterns, indicates that they are unlikely to be closely related. (Report by D.R. Hook, British Museum Research Laboratory, 23 November 1989. It would be most interesting to carry out a similar analysis on the Volos banqueter which
might confirm that it belonged to the same vessel as the present example.)

7 However few and fortuitous the finds, these figures may be a coincidence that supports the above hypothesis. The man who made this example either saw the vessel from which the British Museum piece came or, highly improbably, another almost identical. We do not believe that bronze vessels adorned
with figures of the quality of the British Museum banqueter were common.