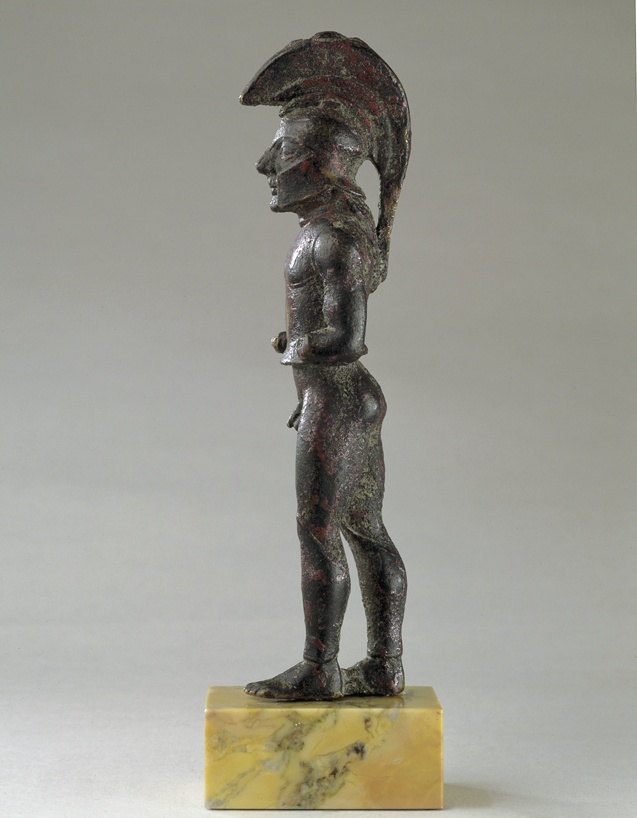 Ex collection:
Major Tadeus Altounyan (acquired from a
Bedouin in Yemen, who had the piece 11 years) and thence to his son Andrew Altounyan

Condition: the ends of both forearms are missing but the solid cast was originally flawless and of very fine quality. A thick sand-induced patina forms a layer which, where chipped or worn down, lays bare the original metallic forms.

Such a surface can only be induced by hundreds of years of burial in sand, a sure proof that the hoplite reached Yemen in antiquity. The figure was worn by the Bedouin finder for eleven years against his chest, as a fetish. The metal shows through yellow on the stumps of the arms, midriff, nose, point of helmet crest, genitals and toes. The rest of the statuette is a yellowish-brown medal colour with large patches of red cuprite and gritty sand and pebble deposits.

For the type, see cat. no. 115, though the present figure wears no tunic.

The warrior probably held a spear in his right hand and a circular shield on his left forearm.

There is a rapport with a warrior from Dodona [1], once fixed to the rim of a cauldron. Whether our hoplite was also fixed to a vessel remains uncertain on account of his condition. The double moulding on the left side of the helmet crest seems not to have been repeated on the right side, if this be so, the figure is to be seen from the left. Since almost all warriors from the rims of vessels as well as figures in appliqué on the shoulders of craters are shown moving from left to right, our figure probably had a counterpart facing him on the edge of a vessel or belonged to a free-standing group.

In style the closest parallel for the proportions of the body and the relationship of parts, is the hoplite from Lykosura in Messenia [2], though the crest of the helmet is very different. Also very similar would appear to be a little hoplite from the Samian Heraeum [3] (extremely oxidized).

Our warrior in all probability was produced in Sparta or possibly by a Spartan working in Dodona. In Schutz und Zier we had suggested "Laconian? or a North-East Greek workshop (Ambrakia, Epirus) in Laconian style".

In favour of the Laconian attribution is his massive volume and the proportions of his body to which should be added the find-spot, in view of Sparta's ties to Samos and East Greece.

Historically, the discovery in Yemen is surprising but plausible. If there was trade with Arabia in incense, myrrh and other spices in the 6th century B.C., it would have been conducted by East Greeks, but the figure might easily have passed from hand to hand via Egypt or the Levant.