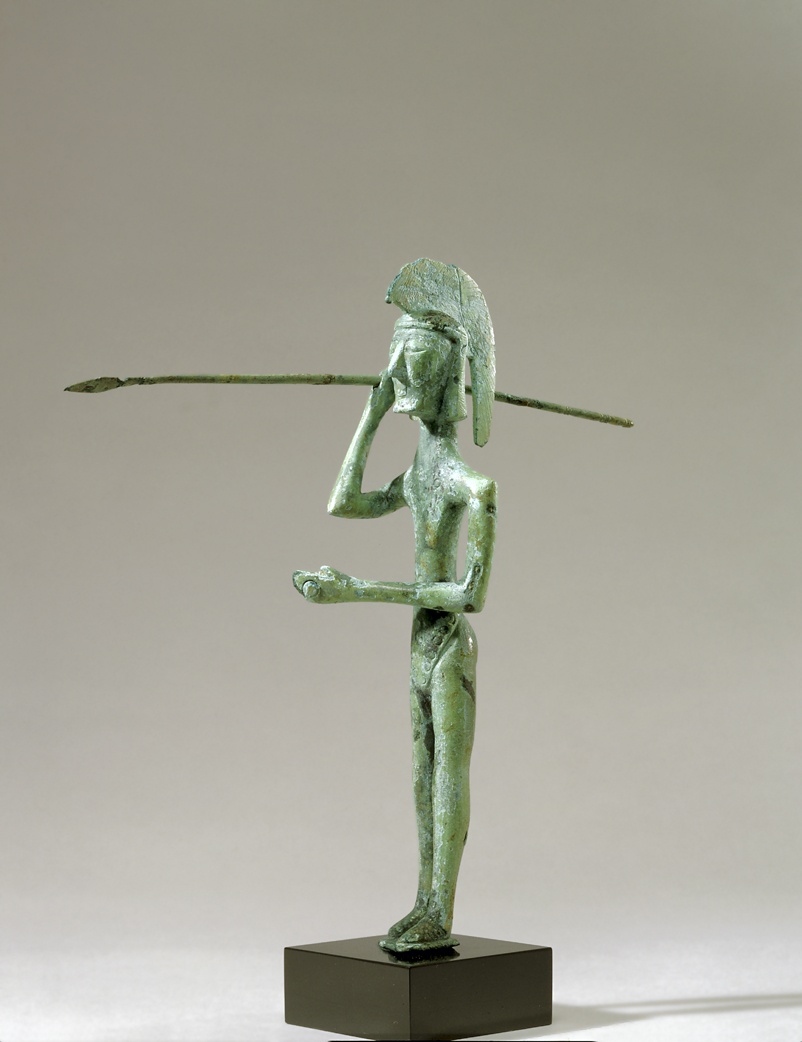 Solid-cast by the lost wax process, chiselled and engraved.

Condition: patina very light green with yellowish overtones, the undersurface showing in places a whitish cuprous chloride (nantokite); the metal showing through here and there. His original spear and shield missing. Chips on the crest of the helmet and tip of the left hand.

The spear has a similar patina; the butt once broken off about 3.7 cm from the end now refastened.

The warrior with his provincial Dedalic face presents a certain enigma [1] - a true reminder that artists and works of art travelled, styles circulated and overlapped, old ones carrying on alongside new. We often have only the odd representative for the production of certain regions, and know little of the artistic production of most of the localities in contact with Greek colonies and outposts [2].

The warrior was probably made by a first-generation Greek in Italy but might even have been made by a native Italian under strong Greek influence.

Greek is the general stance, the angular arms, the raised right hand that held a spear, the left forearm against which a shield was attached through a rivet in the hand, the parallelogram base with a hole through its centre for affixing to a large vessel (for a similar attachment see cat. no. 85).

Italic is the loincloth and its punched circle border; the helmet is inseparable from the hair, somewhat like a skull-cap, rather South Italian in feeling, with its unusual crest representing a horse's tail, carelessly incised; the long trapezoid face with a square chin; the concave indent [3] vertically between the chin and the cheekbone at mouth level; the strip in low relief below the nose; the use of a vertical line of punched circles to decorate the back, and the same punched circles to indicate the navel and nipples.

Though we may sense a Corinthian or Euboean [4] aura, probably due to the inspiration behind him, his broad flat neck and almond eyes surmounted by grooves for eyebrows, give him a forceful presence, a somewhat uncouth Italic characteristic.

There are parallels for certain details: the punched circles and the "rocking" pattern on the helmet close to the skull on local products from the region of Sinuessa probably datable around the early 6th century B.C.

There is also a fluidity and naturalism of the buttocks, thighs and legs above the short feet that are, as Rolley [5] rightly points out, of a suppleness unimaginable before the 7th century.

If our statuette has been dated to the first quarter of the 7th century, this is because it could not be otherwise if it were Greek from the mainland, whether Thessalian or North-East Peloponnesian.

However, in Italy, it is some half a century or more later, as shown by the more advanced characteristics and parallels with local works. There is in addition a certain time element for a Euboean, Argive or Corinthian style to be appreciated by a native population and exercise a lasting influence on local production.

It should be remembered that whatever the main influence, there will be a convergence of currents embodied, however subtly, in such a work.

If our attribution is correct, some of these currents will ensue from trading relations between the Etruscans (those of Cerveteri under Corinthian influence) and the Euboeans of Cumae and Pithecoussai; in addition, the ebb and flow of influence between Campania and Magna Graecia should not be overlooked, possibly responsible in the present case for our statuette's distant affinity to certain Tarentine [6] products.

The original spear was not found and the one exhibited does not belong to the warrior. It was given to the owner most generously by Capt. Spencer-Churchill; it fits the statuette beautifully in size, type and colour. Though its find-spot is unknown, it is in all probability Italy, and the mouldings, shape of the point and finial of the butt are in keeping with a date in the 6th century B.C.

1 Despite the alleged find-spot, we had once thought that this was a Thessalian product on account of its patina, of the punched circles and above all on account of the "rocking" pattern that covers much of the surface on the helmet crest - somewhat like the decoration of the catch-plates of Thessalian fibulae; and for its general provinciality. See Sarian, H.: BCH 93, 1969,
p. 664 n. 2.

2 Though not directly relevant to the bronze, an example of a parallel type of problem is the Aristonothos crater from Cerveteri dated around 650 B.C., in the Palazzo dei Conservatori, Rome (Bianchi Bandinelli, R., Giuliano, A.: Les Etrusques et l'Italie avant Rome, Univers des Formes <Paris, 1973>, fig. 436-437), likewise somewhat of an enigma. What we have here is a local Italiot production from Sicily, Magna Graecia or Etruria, probably by a first-generation Greek in Italy under the strong influence of a major centre in his homeland.