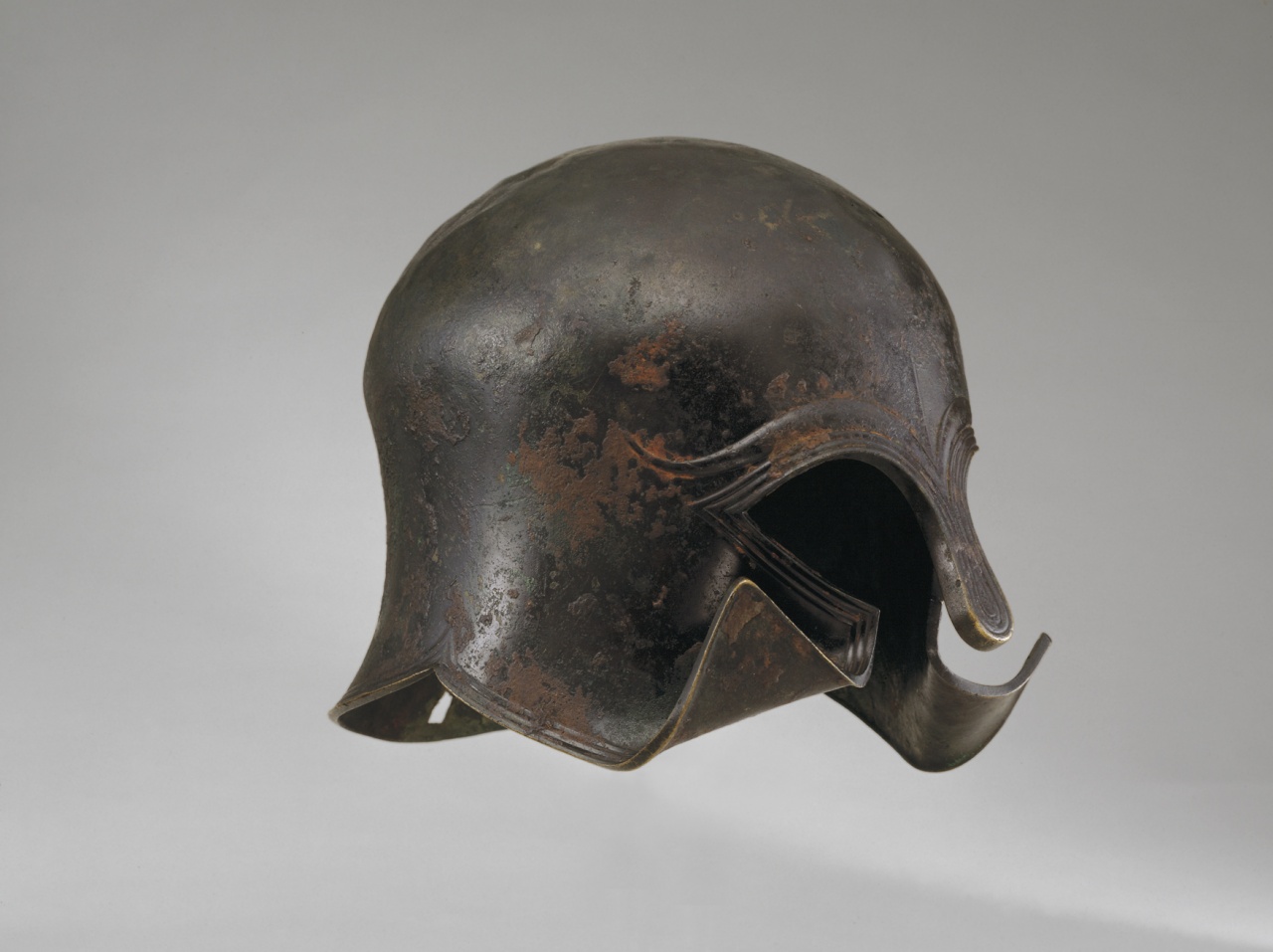 Made by hammering thick bronze sheet, probably already cast to an appropriate spherical form, working up from the sides towards the top.

The crown is very thin, a normal consequence of the metal being stretched by repeated hammering and annealing, its curvature and shape giving it structural strength, which nose-guard, lower half and rim possess on account of their considerable thickness.

The exterior decoration is then added in the cold by chasing, using an anvil.

Condition: part of left eyebrow missing, a few holes on crown of helmet.

Produced in Greece, Central and South Italy, it was worn all over the Greek world, by Etruscans and adopted by some other non-Greeks.

Examples are found over much of the ancient world: primarily in sanctuaries in Greece and in tombs in Italy.

The present example belongs to the second phase in which there are two prominent types: the so-called Myros-Group and Lotus-flower-on-forehead-Group.

The two groups overlap, though it would appear that the earlier examples of the second phase were the otus-flower-on-forehead with very thick nose-guard (c. 9 mm). In this group we observe that the lower line of the eye cut-out meets the line of the cheekpiece in an upturned angle.

This helmet, on which the lower line of the eye cut-out curves only very slightly at the angle, belongs to another group, near the Lotus-flower group.

Another unique feature, a narrow ridge about 5 cm in length going straight up from the junction of the eyebrows, is also reminiscent of the group, and the thickness of the nose-guard (9 mm) is characteristic. The eyebrows look like a stylization of bulls' horns, a symbol of both courage and strength.

Our helmet was once dedicated as a votive offering in a sanctuary and affixed by a squarish hole in the middle of the nape.

The cheekflaps were turned up at the lower corners to prevent reuse. After a while, to make place for new dedications, votive offerings were disposed of. This is attested on our helmet, since the attachment hole was ripped and the top of the helmet crushed in antiquity (hammered out since discovery).

The attribution to Magna Graecia is based on the type, which is mostly found and therefore produced there. An additional clue is its having belonged to an English collection - possibly the property of Lord Londesborough - in the late 18th or early 19th century. Such collections were almost entirely made up of finds from Italy.