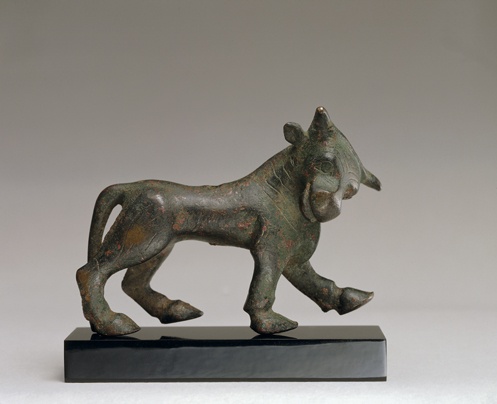 Solid-cast by the lost wax process and linear decoration added in the cold. Pierced horizontally through the middle of the body for fixing to a tripod stand by a rod.

Condition: back of left ear and right front nostril flattened.

Olive black to dark brown patina with red and green deposits; the metal showing in certain places through wear.

This bull, though rounder, less angular and stiff and probably later in date, can be related to the Armentum horse and rider - often related to Tarentum.

They share a certain kindred spirit and linear type of engraving.

We agree with Rolley that the so-called "Grumentum Rider" [1] from Armentum is not Greek nor Tarentine, but local Italic work under Greek influence.

All over the hinterland, behind the Greek colonies on the coast of Magna Graecia and Sicily, indigenous towns thrived; in our present state of knowledge, these form a sort of cultural no man's land - they had sanctuaries, and some of them workshops also.

Even on the coastline, the influences were diverse and the cross-currents many: Tarentum influenced by Spartans, Metapontum by Achaeans, with traders stopping by and foreigners passing through, etc., etc.

For instance, in Pesaro [2], we have a hydria handle representing warriors, modelled after North Greek examples, which in turn derive from Laconian prototypes. Other bulls from Andria [3] in Apulia, though different, share certain characteristics with ours.

Our bull, from a similar complex as the Armentum "Horse and Rider" under Tarentine influence, is from one of those local Italic workshops. Notwithstanding the fact that their art is marked by local colour, it generally expresses a character and sometimes a humour that owes much to the Greeks.