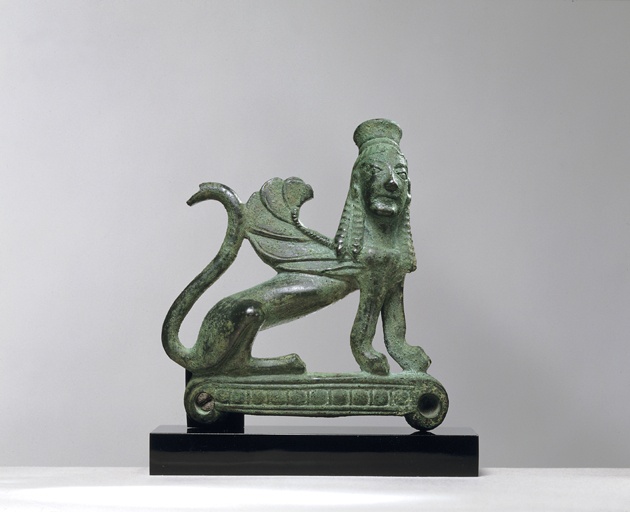 Solid-cast [2] by the lost wax process, carefully worked in the cold, burnished and polished.

Condition: patina darkish olive green where smooth, lighter where sandlike and granular, and with earth deposit. A speck here and there of red cuprite and traces of blue on the back of the capital. The tail ends in a carefully worked ledge [3] to which would have been added its extremity, indicating that it probably had a decorative aspect and was possibly of precious metal [4]. Beneath it, the back of the volute's cusp open, a casting imperfection, used for modern mounting. Probably both volutes were inlaid, as well as the top of the polos which has a similar cuplike hole.

Under the front volute, on its lower back edge a small modern hole [5].

The ascribing of bronzes from Magna Graecia or Sicily to specific schools is very complex and highly problematic. The artists and workshops of the various cities developed their own styles full of originality that varied according to the centres, the extent of their founders' influence, and an infinite variety of circumstances depending on the artisan's travels, his contacts, his qualifications. There were currents and cross-currents between East Greece, Mainland Greece and Crete, with the colonies in the west, among the colonies themselves which were also influenced by the indigenous population.

The sphinx is probably Tarentine and shows strong Laconian influence, as can be expected in one of Sparta's colonies. However, at the same time, the author sees in it a Cretan influence in keeping with a comparison [6] he pointed out and which is supported by Cl. Rolley. This is a bronze in Athens [7] from the cave of Mt. Ida, surely a local product. It differs from our sphinx and its companion in London, "... cast from the same melt, and likely to have come from the same vessel" [8], in that the head appears slightly more frontal, and the upper edge of the wing has a ridge which is not incised as here, a Laconian characteristic. The tail is more curved, attached at the rump and also at the wing, it descends in a loop ending in a closed lotus bud-like shape; also, the front paws are attached to each other and the section between the volutes is divided into fifteen narrower divisions rather than into ten rectangles. Though the eyes and hair are very similar, the workshop must be different. A. Lembessi told the author that local sculpture in Crete was influenced by Corinth towards the end of the 7th century, and when he mentioned Cretan contacts with Magna Graecia, she confirmed this and added "also in the late 7th century and particularly with Gela". The polos on the sphinxes is very Laconian and is a characteristic commonly reproduced in Crete from the Dedalic period onwards.

It was probably attached to a bronze vessel, or possibly a piece of furniture. Roughly comparable pieces are three sphinxes from Trebeniste [9] which Cl. Rolley ascribes to Corinth [10]. They are different but their tails and the odd detail bear resemblance to the sphinx from Mt. Ida. There is a sphinx from Reggio Calabria [11] assigned by I. Caruso to a Peloponnesian area, possibly Corinth.

P. Arias [12] attributes the present sphinx to a Locrian workshop. Sphinxes in Weimar and Paris ascribed by Jantzen [13] to Tarentum are comparable, however, though with differences, more Ionian and with less of a local touch and possibly more refined. This sphinx is tentatively ascribed to an area influenced by Tarentum.

1 For the most part assembled by Count Vito di Rivera Capialbi in the first half of the 19th century.

2 A small hole in the inguinal region might indicate that the body itself had a central core, unless it be only the result of an air bubble.

3 On which there seem to be slight traces of soldering.

4 Both plausible reasons for this element having been made separately.

5 Drilled by the British Museum Research Laboratory at the request of Brian Cook, at the author's suggestion, for the purpose of analysis and comparison with the bronze sphinx in the British Museum 1867.5-8.766, formerly in the Duc de Blacas collection, which the author had always thought came from the same vessel and was by the same artist. The Research Laboratory report of 23 November 1989 supplied a detailed table of 14 different metals and traces thereof, stating "... the two sphinxes show that they are of identical composition, well within the analytical errors of the technique. The obvious conclusion is that they were cast from the same melt, and were likely to have come from the same vessel." (D.R. Hook).