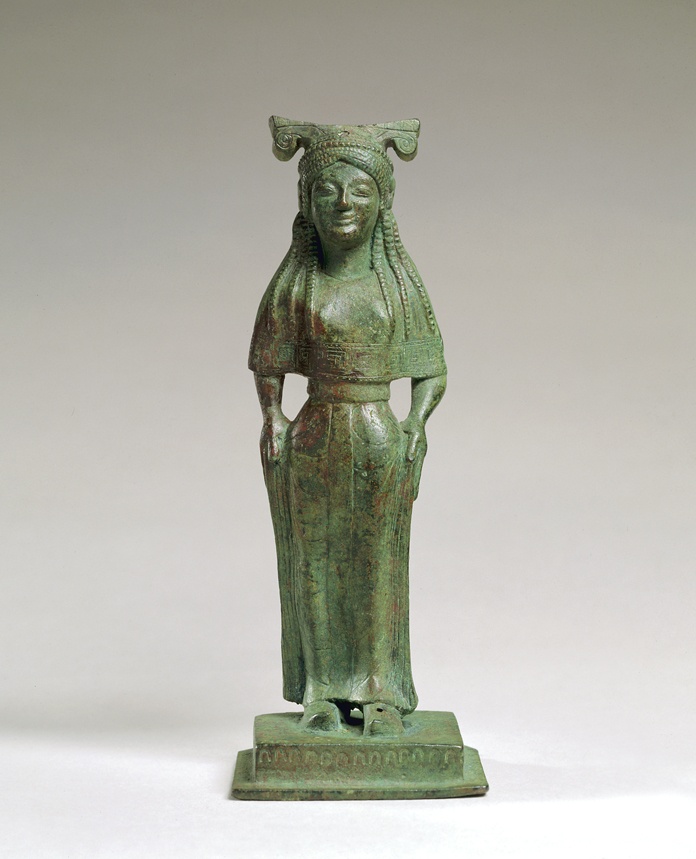 Solid-cast by the lost wax process, the base cast separately [2]. Carefully and elaborately worked in the cold by means of different chisels and punches. The curved capital on top of the head worked to receive the mirror disc, a rectangular cavity in its top now filled with oxidized lead, surely to help secure the mirror. It is probable that the round hole above the hair tress in front, now filled with the remains of a broken rivet, and on top of the hair at the back, were to help hold the mirror disc vertically in place.

Condition: patina olive green of varying shades. The right side of dress, arm and hand a reddish brown, a combination of cuprite and an iron deposit removed by modern cleaning. Traces of red oxidization on both statue and base. Surface fairly smooth with slight earth incrustation. The odd minute air bubble, a large one on top of left shoe.

The Kore, clad in an Ionian chiton, with her arms slightly akimbo, stands on a stepped base decorated on its face with an ovolo frieze indicated by double line contours. On the top right front corner two incised ovolos; maybe a mistake by an apprentice, or a start of the decorative motif that on second thought was found more appropriate as it is at present. The short mantle on her shoulders has a wide engraved meander on its lower front border with a line of punched dots which runs above, between the meander and an outer line and below, between the meander and the edge of the mantle. This only continues around the back. A wide fold down the middle of the front of her skirt divides the pleats indicated by curved lines as each hand holds it up on either side. Curiously, at the back, the same pleats are formed by a double incised line and, though no fold separates them, they alternate from each side and end haphazardly, some slightly beyond the groove formed on the skirt by the parting of the legs. Punched circles decorate the skirt on the back from her buttocks down.

Over the back of her head and ending below her shoulder-blades, the undulating mass of her hair is indicated by vertical lines and horizontal incisions.

The author has always ascribed her to Sybaris and Rolley has confirmed this attribution in publishing a bronze statuette from the sanctuary of Athena from "la Motta" at Francavilla Marittima near Sybaris [3]. She would be an antecedent to our statuette, as he dates her in the second quarter of the 6th century and ascribes her to Sybaris with a question mark. The face, in more simplified fashion and without the sophisticated smile, bears a close resemblance, especially for the hairline above the forehead. She also wears a mantle, the chiton belted below it, its skirt ending above the slippered feet that protrude. Cl. Rolley nicely characterizes both of them as an Ionian expression
of the west.

2 The shoes of the statuette soldered onto the stepped base, bronze metal added and annealed.