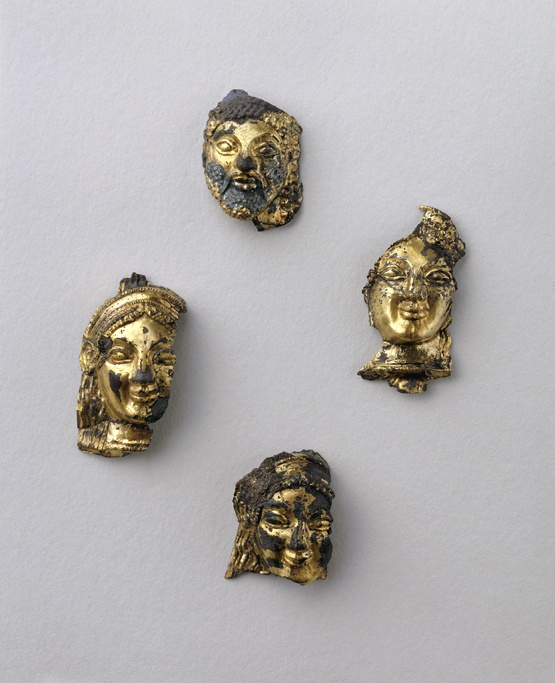 Made of silver sheet covered [1] with gold foil. The masks first roughly shaped probably over a wooden matrix and the details finely chiselled in successive operations. Perfectly cleaned before applying the gold foil. Thin gold leaf will stick to silver without adhesive, but possibly a fine adherence of the two metals was obtained [2] with the help of some organic substance; followed by burnishing all over. In a final step, surely backed with a substance, possibly mineral dust (clay, terracotta or marble) mixed with wax and/or a resinous material for purposes of consolidation.

Condition: the four heads with parts missing and broken, parts of the gold foil, either by chemical action or by tearing, broken away; a., c. and d. with modern consolidation: a. over the forehead and the tip of the nose, c. at the right temple and eye, and d. below the left corner of the mouth and the tip of the nose.

The four masks are illustrated clockwise starting from the top with the male head a., followed by three heads of Korai.

Because of their size and high relief, they were surely appliques [3] and not elements for a necklace, and having no holes for attachment they were probably not backed with cloth or leather. In all likelihood they were decorative elements, maybe for a casket.

For a predecessor to the type, there is a similar head of a male (?), from Athens [4] made in the same manner of very thin silver foil in repoussé. We have several comparisons: a gold necklace with six head pendants, female protomes, from Ruvo di Puglia [5], interpreted as heads of the great goddess Demeter, and placed on the breast of the deceased. Also probably from the same workshop as ours are eight heads in silver gilt repoussé from Canosa [6]. Two more very similar heads, in silver gilt, in Boston [7] ascribed to the region of Tarentum and said to be perhaps decoration from a casket. A further three heads, also in silver gilt repoussé, and ascribed to Tarentum around 500 B.C., are in a New York collection [8].

The present masks are probably Tarentine, as all the others, though they could come from a different centre located somewhere in Lucania or Apulia.

1 Cleaned and restored by W. Haberkorn. Unfortunately they had previously been partly cleaned and somewhat too hastily restored by someone else for the dealer who sold them to the author. They bore traces of knife marks (possibly made by the finders) and scratches made with a glass brush.

3 Originally part of a group of fifteen. These and the rest of the ensemble are published by Ariel Herrmann in: A Passion for Antiquities. Ancient Art from the Collection of Barbara and Lawrence Fleischman (Malibu, 1994), pp. 120-123. The catalogue first appeared for the 13 October 1994 opening of the exhibition in Malibu, in which reference is made only to the Ortiz handbook for Russia which appeared in February 1993, but not to this full entry which was in the hands of the public in January 1994 in London. A.H. differs with the author in stating that the heads were made by hammering the metal into molds.