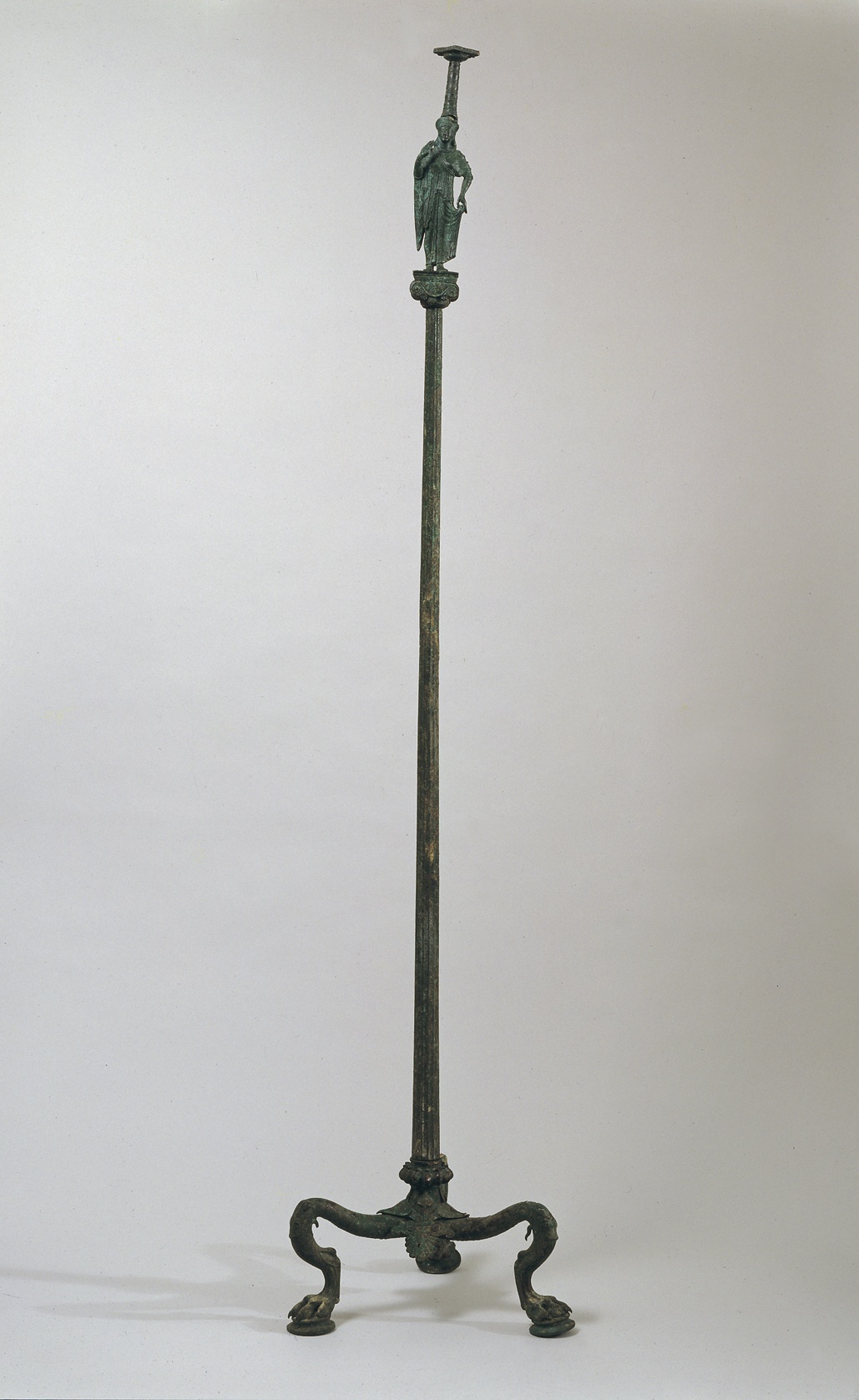 Composed of seven main elements, all solid-cast, worked in the cold: hammered, chased, burnished and polished. The various elements joined to each other either with solder or inserted and secured by a linch pin of round or rectangular section.

The statuette, soldered by its feet onto a rectangular plate, damaged by a felling blow and/or crushing: the right forearm and hand bent inwards with tip of index, thumb and lotus bud they held, missing. Damage to the left shoulder and to the top and left side of the diadem. Nicks to the tip of her nose, upper lip, chin, left cheek, hairline, left forearm and back of hand.

The tubular shaft on her head fits over a cylindrical projection [1]. Slight casting damage at its base and two cracks on the rim at the top, on which rests a Doric capital transfixed by a central rod [2] soldered in place, which inserted into the element, secured by a transverse pin (now missing).

The Doric capital, which would have been surmounted by a dish, possibly rectangular and now missing, pierced on its four corners with traces of iron, maybe pins, from which must have dangled [3] decorative elements: short chains from which possibly hung birds.

The surface of the statuette and shaft is granular, the patina uneven, spots of bright green over a dark brownish to brownish red metal that shows through here and there. The odd traces of blue cuprous silicate?

The Ionic capital on which she stands with blue, and green cuprous chloride, iron deposits and light medal bronze visible.

The stand is cast in one piece with a large, slightly tapering hollow down through its central section to enable insertion of the shaft. It is composed of three feet, palmettes at their intersection, each surmounted by an ivy leaf, a snake protome on the curve with lion paws projecting from their mouths.

One of the three feet broken below the ankle and reattached; one of the ivy leaves, forepart and top of snake's head with nasty gashes, the odd nick here and there. The present surface of a slightly sandy texture of varying greens from whitish to dark, traces of blue, brownish to reddish brown bronze showing through here and there and considerable earth incrustation.

The column tubular and slightly tapering up, cast and forged with fifteen flutes, a lower recessed section tapering down and slightly over 10 cm in length, pierced through near its lower end with a rectangular opening to enable the fitting of a peg to secure it when inserted through the foot.

On the lower half of the column two rectangular cut-outs, one repaired in antiquity with the fitted piece still in place, but missing for the other. The top with a barely tapering recessed section about 3.6 cm long to enable the fixing of the Ionic capital through its tubular section and hollowed-out middle. On either side of the echinus iron deposits from the pin holding it in place.

The rectangular plate beneath the feet of the Kore surmounts the capital.

Surface rough owing to the patina of varying shades, malachite green in places, earth incrustations over the brown to brown reddish metal which shows through here and there.

The statuette of the Kore that surmounts the candelabrum is dressed in a chiton and a himation that passes from her right shoulder under the left breast and arm.

Cl. Rolley informed the author that she was photographed in Metapontum in 1926 and says "very probably made on the spot" [4]. An example of the Ionian taste in Magna Graecia, as Cl. Rolley suggests, on account of the way she is treated, both spread out and round, the importance given to her dress which takes predominance over her facial features and the somewhat manneristic elegance of her gesture. An interesting parallel for the position and the general composition of the statuette, more Laconian in its facial expression and ascribed to Tarentum, is the mirror handle, Aphrodite with sphinx, in London [5]. A still closer comparison is a marble statue from the Punta del Tonno near Tarentum [6] and as unfinished surely being made in a local workshop, probably by a local artisan, though possibly by an artist called in from another centre in Magna Graecia, maybe from nearby Metapontum. It is very similar for the folds of the himation worn in the same manner with the border diagonally across the breast; almost identical is the upper central fold and the way the himation falls to either side. The position of the legs is similar as is the lower hem of the chiton, though the left front leg would appear to be on the way to being sculpted in a slightly more naturalistic fashion.

Thus Cl. Rolley's attribution to Metapontum for the present statuette is highly probable, and though this author sees in it a strong Tarentine influence, a centre or an artist from somewhere between Tarentum and Siris ought not to be excluded.

1 Bent out of shape towards her left in keeping with the damage to her right forearm and hand and since restored more or less to its original position.

2 Its lower part where the pin went through missing, enough remains to indicate that the capital was placed with its corners on the axes of the figure.

3 The four holes would not be needed to hold the dish in place as the rod projects above the centre of the capital, and the latter's surface is most appropriate for fixing the dish with solder.