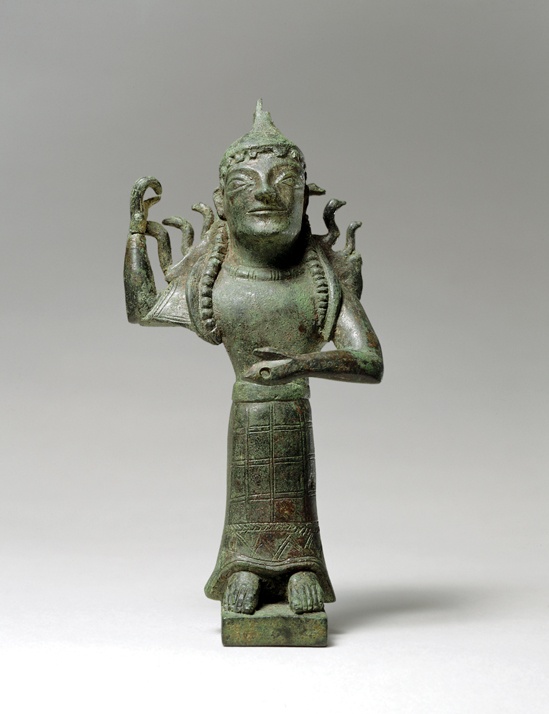 Solid-cast by the lost wax process, front and profiles detailed in the cold with careful engraving of the skirt, and burnished to different degrees. The back left almost as when cast.

The snake protomes, the tail of the helmet crest and the belt were fashioned separately in wax and applied before casting, as was probably the helmet crest [1]. The spear and shield, this last attached to the left hand by a round hole, were made separately.

Condition: patina dark olive to lighter green with spots of red cuprite and metal of varying shades showing through here and there, parts of the surface granular with slight earth incrustation.

Missing the crest of the helmet, spear and shield and two of the eight snake protomes. The right wrist [2] broken off and reattached in antiquity.

The helmeted goddess standing in a static position once held a spear in her upraised right hand and a shield in her left. Both epithets, Promachos and Palladion, apply to her; however, draped with her aegis we see her more as the former exuding the spirit of a "fighter in the front rank and protector" [3], though her stance and tight-fitting robe ending at the ankles are in keeping with a Palladion.

She is the earliest known representation in Greek art of Athena with the aegis [4], here fastened by two leather thongs hanging alongside the braids on either side of her chest.

An exceptional representation, she has been described as a local but barbarian work [5], probably a misreading of her tremendous presence; whereas we see her as a product of local Greek workmanship, affected by the environment but strongly influenced by Laconian sculpture [6].

A fitting parallel is the bronze female figurine in Olympia [7] dated towards the end of the 7th century B.C., described as "... certainly the representation of a goddess" [8]; though the latter's braids are more primitive and her peplos more elaborately decorated, their proportions and stocky appearance are similar as is the development of their bodies, the position of their feet and the way these protrude from under the peploi. The decoration of the lower part of their peploi bears resemblance with its squares separated by double horizontal lines and other
linear motifs.

Both the Laconian influence and provenance would be in keeping with history and tradition. Palladia existed in certain cities of Magna Graecia [9] and there is also a Laconian myth that she originated in Sparta.

Selinunte, says Rolley [10], did not have a cohesive artistic tradition and in general Ionian influence predominated. This Athena was a cult image and being Doric was in all likelihood made by a Dorian Greek emigrated there; though however unlikely, she was possibly imported.

1 Since casting the figure head down with the snake protomes was technically feasible, the centrally placed helmet crest would be less of a problem. Thus in all probability the crest broke off in antiquity, maybe simultaneously with the wrist, and was replaced/repaired as evidenced by the stepped section on top of the helmet to enable fixing a new crest.

2 Walter Haberkorn - to whom we are indebted for recent light cleaning of the bust to harmonize with the owner's cleaning of the lower part some forty years ago, for the present drawing of the ancient repair and for its explanation - glued the slightly rotating right hand in its correct position. Fascinating are both the emplacement of the repair and the technology employed. He explains the distorted position of the snake protome as a deliberate choice to enable the reattaching of the right hand above its forearm, though leaving a break of some 1-1.5 mm. We do not concur, for one would have thought appropriate and easier to fix the hand to the arm; however, if the snake protome was bent out of place when the hand broke off, it would not have been possible to reattach the hand in the correct position.
Thus, the artisan in antiquity chose a complicated way: to drill the small snake head and join it to the wrist "in a ball-and-socket joint". A short plug was flattened into the snake head and forced into the wrist (see drawing), with in addition a certain amount of soldering (traces still visible) to hide the gap, with the probable fixing of a bronze plaque to strengthen the repair and cover the join visible from the front.

6 C.M. Stibbe considers this Athena to be Laconian, basing his attribution on the patterns and details on her long chiton which he compares to the Laconian headless female figure (see footnote 7) which he relates to other works from Sparta, and to the Potnia from Grächwil (pl. 18,5) (AntK 38, 2, 1995, p. 68 ff., pl. 17-19).

9 For instance, in Siris some fifty kilometers north of Sybaris which boasted Trojan ancestry. There are the legends of Aeneas bringing a Palladion from Troy over to Italy and of Diomedes stealing the image (Paribeni, E.: EAA V, p. 893)