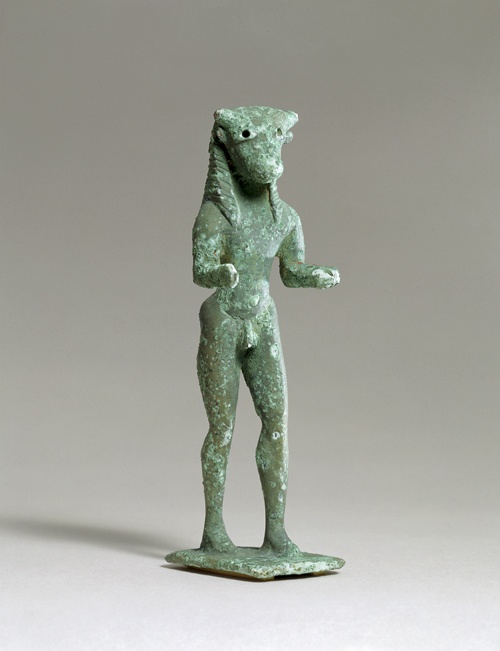 Solid-cast by the lost wax process, cold-worked, burnished and polished. Traces under the base plate of metal leveled down from the casting funnel.

Missing: the attribute held in the left hand as evidenced by a vertical round hole and inlay of eyes; damage to tips of right ear, horns, extremities of hands and front of base plate.

One of the most ancient of the heroic traditions represented in Greek art is the myth of the Minotauros, a monster half-bull and half-man, who lived in the Labyrinth in Cnossos where he devoured the Athenian youths and maidens who were sent as tribute to King Minos. He was slain by the Athenian hero Theseus. Pictorial representations of this episode starting around the middle of the 7th century, were frequent in Greek art throughout the archaic and early classical periods.

A very fine earlier statuette is the bronze Minotauros in Paris [2] that once ornamented [3] the ring handle of a Late Geometric tripod; he is generally considered Attic and is said to have come from Olympia, but this is undocumented. However, his patina is typical of certain bronzes from the sanctuary.

Our statuette has no close parallel either stylistically or iconographically. In nearly all depictions the Minotauros is portrayed in the context of the story of Theseus [4]; the monster is either alone (in the Labyrinth) awaiting Theseus or in the act of fighting and being defeated by him. Here, he stands on a rectangular flat base of which three sides are carefully finished whereas the front is somewhat irregular, probably the result of corrosion. He is represented naked with a bull's head. Both his forearms are extended forward. His left hand clenched with a round hole indicating that he probably held a staff or spear. His right hand, extended forward one palm facing the other, gives us no indication. However, in all the known illustrations of the Minotauros he holds rocks with which he fought Theseus. His stance with the left foot forward and his hair falling in long tresses across his shoulders and down his back would fit a kouros making an offering, but the way his hair is indicated at the back with vertical lines and even his left leg forward are illustrated on a stamnos in Paris [5], apparently of Megara Hyblaean manufacture reminiscent of Crete, with which relations are well attested for this period. There is another related stamnos in Basel [6] figuring a Minotauros fighting Theseus, surely also
from Sicily.

Noteworthy are his prominent buttocks and somewhat provincial legs - the indication for the knees a most unusual X rather than an upright lozenge - revealing that he is a local creation influenced by Greek tradition. Thus, he is surely a Sicilian work, a votive offering, and may represent a local divinity [7] rather than the mythological Minotauros.

1 Owing to wrong information, Palazzolo Acreïde (Acrai) was given as the indicated provenance for this piece in Hommes et Dieux.

3 Riveted to the handle and the element under his feet attached to the rim of the cauldron.

7 J. Spier in a letter 16 May 1994 does not accept the Minotauros hypothesis and believes that we are here in the presence of a river-god, perhaps Achelous, making a libation, a representation important in Southern Italy and Sicily. He draws the author's attention to the representation on coins and particularly the famous stater of Metapontum dated c. 450 B.C., which depicts the river-god Achelous as a bull-headed man (Kraay, C.M., Hirmer, M.: Greek Coins <London, 1966 >. no. 230,
p. 307, pl. 82).