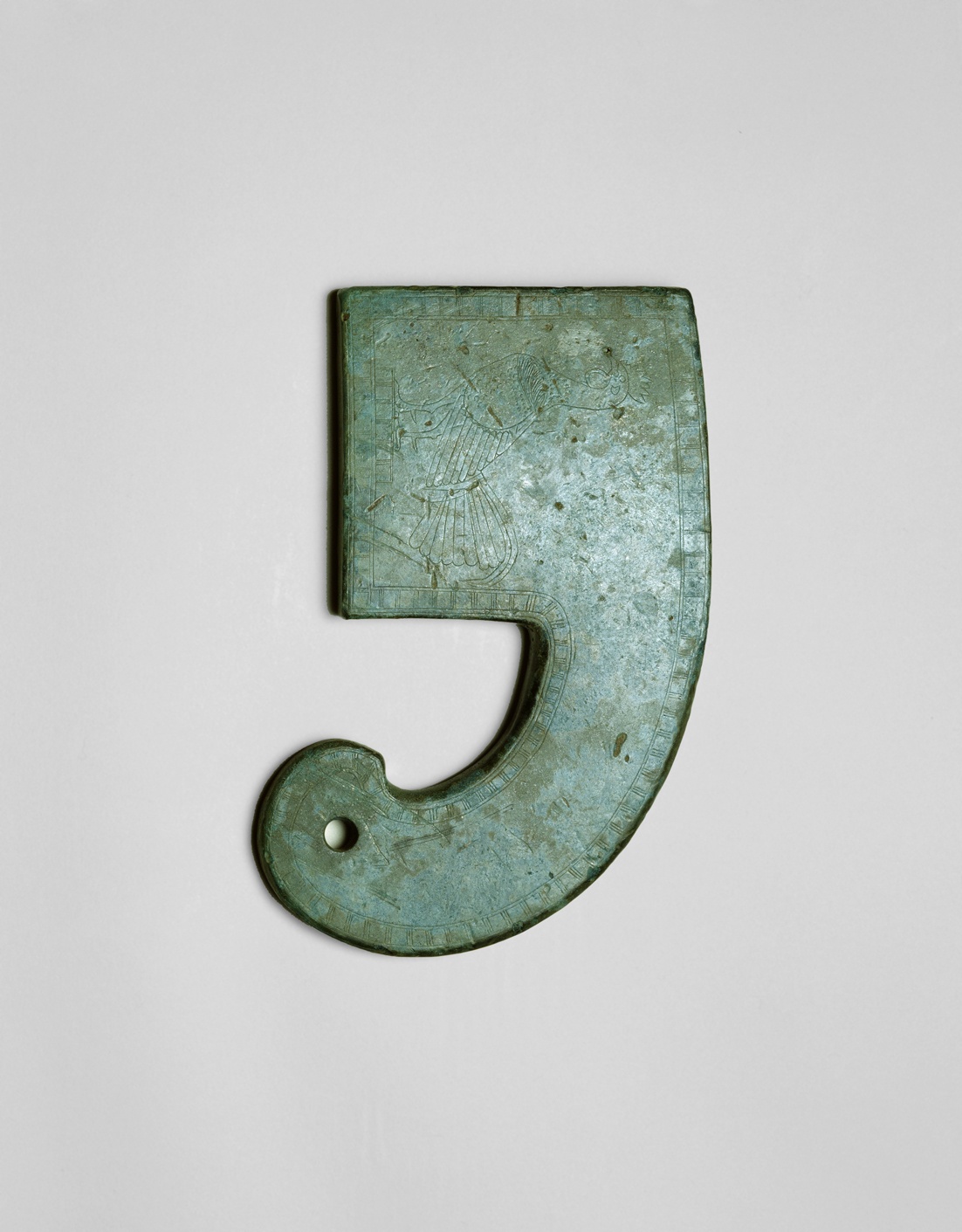 Solid-cast by the lost wax process and extensively cold-worked for the inscription of the dedication and decoration.

Condition: the odd nick here and there, the corners slightly rounded, a small hole (casting flaw due to a bubble) at the tip of the beak of the cock on the reverse side of the inscription.

A pale greyish green to darker green with patches of earth stains that have worked themselves into the surface.

One of a pair of halteres used in the long jump, one of the five events of the pentathlon [2]. A standing cock [3] is engraved on either side of the heavier forepart and the lower butt end is pierced with a round hole. Along its edge on both sides runs a sort of metope-and-triglyph motif. The inscription is engraved on one side and above the squarish section on the edge. Many examples, the ancestors to our modern dumb-bells, survive of different shapes and materials. The types vary according to the period: from club-shaped in the 6th century they become more spheroid or cylindrical, and later on more oval with emplacements for the fingers as Pausanias (V 27,8; VI 3,4) tells us. They were made of stone, black stone, green diorite from the Taygetos, of lead, of terracotta [4], these last obviously as votives.

This specimen is the only extant bronze one known to the author. That such examples existed is certain. There is a bronze engraved discus in Berlin [5] from Aegina dated around 470 B.C. that illustrates a spear thrower on one side and on the other a long jumper holding weights. These are surely of bronze as shown by their sharp outline and in keeping with the material that a toreutic artisan would have favoured. Also of bronze seem to be certain of those illustrated on early 5th century Attic pottery that shows us athletes in various stages of the long jump itself or in preparation for it. Thus the outside of a kylix attributed to Onesimos in Boston [6] showing a long jumper in the middle of a leap, and also curiously enough at the same moment, or what seems to be, the figure on the outside of a cup by Douris, c. 490 B.C. in Basel [7]. However in the Chiusi example the position is realistic, the same as that a modern jumper would adopt [8]; but the Basel illustration would seem to be in the gymnasium and the jumper is in a sort of dream-like, unrealistic position, his legs drawn up under him, his elbows to his body, the forearms parallel to the thighs, the weights held out in front above his knees, a sort of ritualistic leap in a dance perhaps, for behind him we have an aulos player. The position expresses a measured formalism.

How was the long jump performed [9] and what was the purpose of the weights? Five successive leaps were executed. The athlete started from a standing position by swinging the weights up forward, arms extended, swung them back bending his legs, then straightening these out propelled himself with his legs and arms forward; as he lands his arms go back, his legs bend and straightening these out he throws his arms forward as he takes off for the second bound. He only lets go of the weights on the fifth and final landing. The weights conferred to the body an added springiness at the moment of the take off contributing to forward momentum, apparently ensuing in each leap covering slightly more ground than the previous, and to a controlled landing on both feet side by side.

Unlike modern jumping where only the record is all important, for the Greeks the form, the perfection and the beauty of the whole exercise was an integral part of the sport. One would have been disqualified if one did not land harmoniously. Their sports were an important part of their education and upbringing, and in the author's opinion the manner of proceeding, ritual adapted to context, was a training for ethical behaviour in general.

The inscription is incomplete for there were originally always two weights and the dedication would have been inscribed over both. This can be deduced from two contemporary or slightly earlier weights with inscriptions also in hexameter, one in stone dedicated in Olympia that belonged to Akmatidas of Lacedaemon, and one in lead dedicated in Eleusis that belonged to Epainetos [10]. Thus, it was necessary to have both to be able to read the whole dedication. When dedicated our weights would have appeared as shown here. On the surface of the weight the inscription (A) is to be read from left to right and says: "and it is Eumelos who has dedicated me to the good thrower Apollo"; and on the edge (B) it reads from right to left: "I belong to Eumelos".

A does not follow B and there is a fundamental difference between the two inscriptions though they both refer to the same person. On the one hand there is a prose text (B) for the owner of the object and the other text (A) is a verse in hexameter.

D. Knoepfler tells us that the script indicates that it is in Aeolian dialect for which the patronymic adjective Eumeleios (for the genitive Eumelou) is decisive, for this is an almost exclusively Thessalian form to indicate the owner of an object, in addition to which we have several examples of the name in Thessaly. The only difficulty is in the form of the word Apollo, which however could have been preferred to the dialectical form Aploun for metrical reasons.

Thus, the inscription would point towards a date in the beginning of the 5th century contemporary with the Persian Wars, and the comparisons we have given are also to be dated in the first quarter of the 5th century. In conclusion, though we do not know where the object was made - artisans and athletes travelled - we concur with D. Knoepfler that our weight was in all likelihood dedicated in a sanctuary of Apollo Pythios in Thessaly, the homeland of Eumelos. The latter's victory in the pentathlon probably took place in Delphi during the pan-Hellenic Pythian games which attracted many Thessalians.

We are totally indebted to the article of Denis Knoepfler for his explanations on the inscription and its meaning, and his ensuing conclusions as to provenance, date and place of dedication. However, this writer is responsible for any and all mistakes.

1 Called in Greek halter from the verb hallesthai, to leap.

3 A most appropriate bird for his association with Apollo, as symbol of the agon, the athletic contest, as representative of courage with a taste for combat and victory. The author concurs with D. Knoepfler's suggestions that the missing weight also may have carried the engraving of a cock.