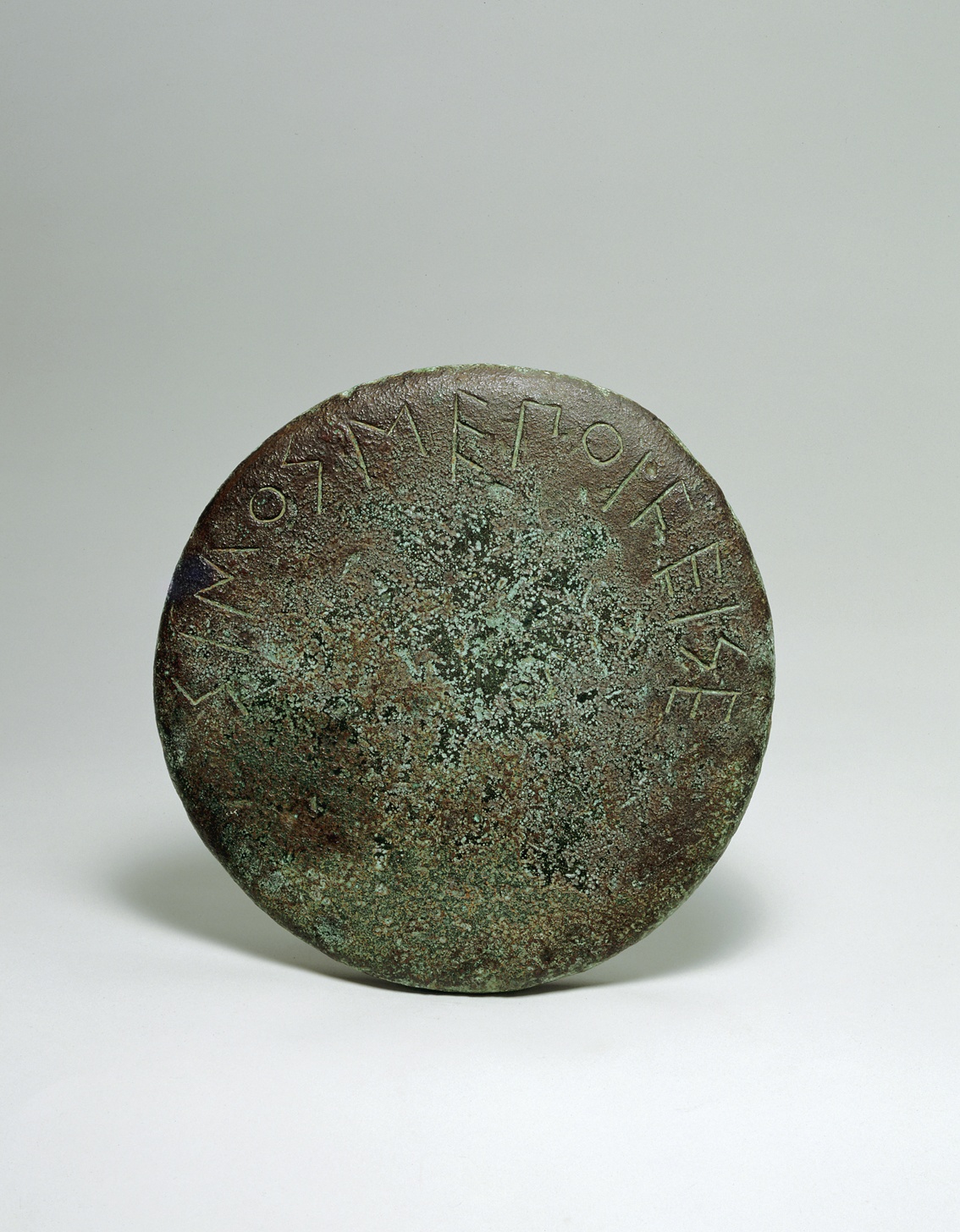 Solid-cast by the lost wax process, dedication inscribed in the cold.

Condition: a fairly rough surface in order to avoid slippage would appear to be the finish of disci actually employed and not just made for dedication. On the reverse, two parallel longitudinal grooves.

A patch which is an after-casting repair, a fairly common occurence on disci actually used. A few nicks and the odd smaller pit left unfilled.

A rusty brown bronze with remains of olive green patina and the light green which was underneath it.

These five disciplines required considerable physical and mental skills and were considered then as now the qualifying criteria of the ideal athlete.

Made of stone, iron, lead, but mostly of bronze, the discus varied both in size and weight [2], depending on the category of the athlete using it, whether boy or man, and the site of the games.

Our attribution to Boeotia is based on the inscription which reads: Simos made me, in the Boeotian script.

We are most grateful to Theodore Selov-Kovedjajev who studied the inscription closely and concludes that it is definitely Boeotian and, by comparison with all analogies, to be dated in the last quarter of the 6th century B.C. and no later than the end of the century [3].

1 Papadiamantopoulou-Kalliodi, S.: Le corps et l'esprit (Lausanne, 1990), p. 61; cat. no. 45, p. 104, mentions discus contests in Homer. However, in the Odyssey (VIII, 186 ff.) it is simply a stone or rock that is being thrown, whereas in the Iliad (XXIII, 826 ff.), it is a lump of rough-cast or meteoric iron that is hurled. If these are not precise references to Olympic-type contests, they are, in any case, their fore-runners.

3 Alan Johnston, in a letter dated 6 March 1986, without having studied the discus and only on the basis of photographs, thought the inscription Boeotian and because of the ei perhaps already to be dated in the 5th century B.C.

In response to the suggestion: could not the inscription, difficult to explain otherwise, be taken as dedicatory? Selov-Kovedjajev remarks that from the Archaic period onwards "so-and-so has made" might be construed as a dedication if the object so dedicated - vase, statue, etc. - was made by the offerer, which obviously in the present, would be the artisan. Thus he concludes that we are entitled to consider our discus as having been dedicated by its maker.

One might have expected a bronzesmith-athlete, dedicating a discus of his own making, to have expressed his concept better.