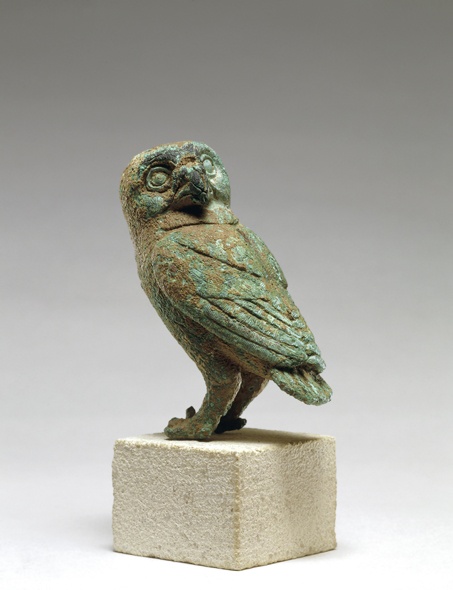 Solid-cast, the feathers carefully chased in the cold with an infinite number of hatchings to render the barred and speckled plumage.

Condition: beak fissured by oxidization, most of claws missing, some hatching abraded and part of surface covered by hard earth deposits.

Patina: blackish over eyebrow and beak, light green to whitish green with traces of oxidization and chlorides.

Birds were agents of the god's will and omens. The owl, particularly associated with the goddess Athena [1], was the symbol of Athens and considered an omen of good luck by her citizens. It appeared on the city's coinage which was widespread in Ionia. This bird is the glaux, or little grey owl.

Possibly it was once held on the open palm of a statue representing Athena.

Though difficult to date, attitude, stance and plumage suggest the early Classical period.