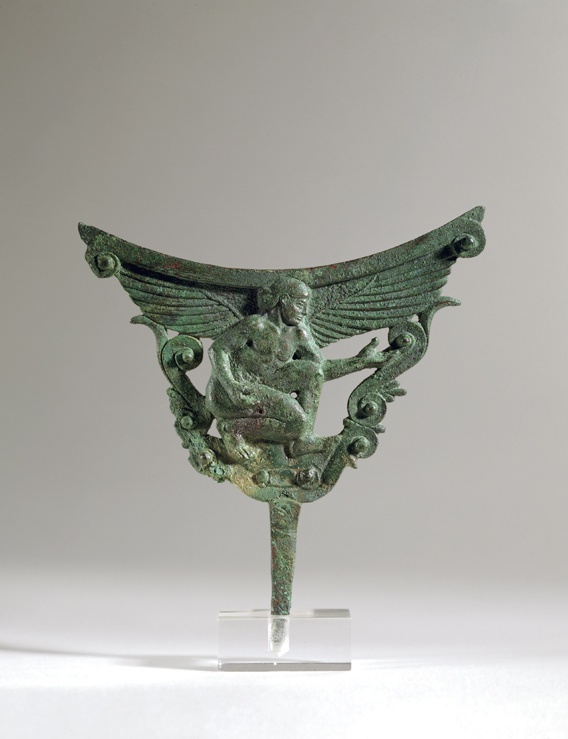 Solid-cast by the lost wax process, the knobs fashioned separately on the end of thick pins inserted in round holes in the volutes; the whole carefully worked in the cold with particular attention to the hair and face, the wings sharply delineated; the surface burnished and polished. The tang for fixing in the handle and the back roughly smoothed off, though leveling the pins with precision, save for the one on either end of the volute plinth for directly attaching to a joining plate to the mirror.

Condition: patina green with slightly granular surface deposits, traces of cuprite, green chloride and blue carbonate or silicate, iron deposit on the right thigh and lower leg; damage to the filling palmette behind the figure and to the edge of the top volute.

Missing: the end of one of the pins at the back.

The winged youth or Eros is shown in a crouching position. He is probably playing knucklebones [4] and is just about to make the throw, his right arm drawn back, his left held forward for balance and direction. A different interpretation is possible, though highly unlikely because of the position of the arms. For a somewhat comparable position, but with a different scene, there is the crouching youth, cat. no. 132, and a warrior about to unsheath his sword on an openwork bronze disc from Locri [5]. The volutes and the wings of our piece bear comparison with a hand mirror dated by R. Lullies [6] around 470 B.C. attributed by U. Jantzen [7] to Locri, and siren handles such as one in Paris [8] and another [9] in Athens showing an Eros in frontal stance, crouching, with left leg in similar position.

The school to which our example belongs is open to question. The silver and bronze sphinxes [10], that probably surmounted pins, said to have been found with it, as they surely were, could give an indication. However, A. Oliver in the catalogue of the Bastis collection avoids any attribution. The provenance for these three objects given as "from Elis" may not correspond to reality. In any case, even if it does, the ensemble could have been imported. We had once said "local work" [11] , then "possibly ... but more probably from a centre of Magna Graecia" [12] , and later writing to Claude Rolley: "with Ionian influence ... more probably Magna Graecia" [13]. The latter, in his publication [14], tells us that mirrors were characteristic products of Locri; that there were simple ones to which this openwork type of the second quarter of the 5th century belongs, where a purely decorative element separates the handle from the mirror disc. He ascribes this example to the Ionian style of Magna Graecia, Locri (?). The more elaborate types are those where the mirror is supported
by a statuette.

In conclusion, we are inclined to share the attribution to Locri, though the Peloponnese remains a remote possibility.

1 The attachment (cradle) that joined the mirror disc, highly polished bronze, to the handle of turned bone, ivory or wood.

2 The element or cradle came with its mirror disc (diam: 18.51-18.76 cm) which has a raised border with a pearl rim above an egg-and-dart motif. Since separate when acquired and the handle missing, it was not reattached for it would have squashed the cradle and distorted the proportions which originally were harmonious when all three elements formed an entity.

3 Said to have been found with the two sphinxes on Ionic capitals (see footnote 10), one in silver and one in bronze, which probably surmounted long pins and would have been, like the hand mirror, part of a lady's paraphernalia.

4 Could be a reference to the popular female game, a love oracle.