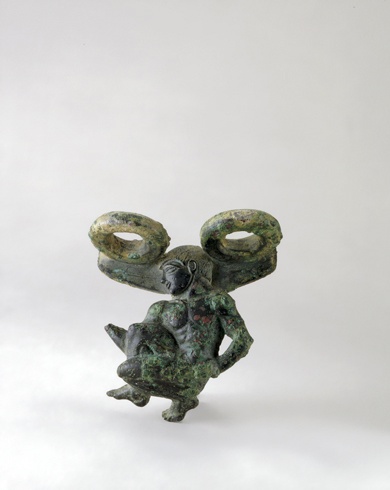 Solid-cast by the lost wax process, chiselled in the cold, carefully burnished and polished.

Condition: patina the colour of anthracite, much of the surface with cuprite and green cuprous chloride or carbonate, here and there abraded and with excrescences. Right hand missing.

The crouching youth was probably holding a bantam [2], a fighting cock [3]. The other handle [4] would have shown its adversary similarly held by its owner. He has been described as a lebes handle because of the shape of the curve made to fit the shoulder of the vessel, though in Meisterwerke griechischer Kunst [5] we had qualified it as a situla handle, a view which K. Schefold endorsed. In favour of it belonging to a lebes are two pairs in Greece [6], kindly brought to our attention by J. Vokotopoulou, one representing squatting silenoi, and the other winged figures, arms outstretched, running in archaic fashion, one knee to the ground. She considers [7] that they are imports from Cumae and that our example belongs to a lebes from Magna Graecia probably also from there.

Though all these conform to the same type of handle, the representations and their style are different, but the Macedonian examples are earlier in date. She also mentioned an example in Naples [8] with a silenos in a frog-like position, his arms partially encircling the loops as his beard slightly protrudes over the inside lip of the vessel. Similar silenoi are the incomplete example in Copenhagen [9] and a pair with their two handles in Basel [10].

In favour of a rapport with the Basel examples are the grooves that underline the muscles on the outside of the calves of the silenoi and the present example and the similarity in the surface area around the knee caps, as well as the curve of the line that divides thigh from calf. It is difficult to assess such details from photographs and to make an attribution based on such slim observations would be hazardous. For the Copenhagen silenos a Corinthianizing workshop in Magna Graecia or Sicily has
been proposed.

E. Langlotz [11] had suggested an East Greek origin, primarily on the basis of the shape of the head, the eyes, and the features in general. He compared it to a youth in the British Museum [12], from Rome, which U. Jantzen [13] attributed to a Sicilian workshop. We do not quite see the similarity between the comparisons which he gives, though there is an Ionian element to our handle. For in this period there is a general ethos throughout the Hellenic world and one can find apparent rapports with several very differently provenanced works: the head of the youth in New York [14] which is said to come from from Smyrna, the candelabrum in the Hermitage [15] from Nymphaeum, a stooping youth in Boston [16] reportedly from Southern Italy and a statuette from the Blacas collection in the British Museum [17] which D. Williams cautiously suggested (verbally) as "possibly Croton or Locri". This last would seem, for its general feel, to be a good comparison for the head. However, it is difficult to compare a head in profile in low relief caught between two rings with a head in the round. Similar are the hairline, the hair around the ear and at the back, the line from the ear to the chin. However, the eyes are slightly different and the ears, though of similar shape, are more vertical and differently finished inside, as is the hair, engraved as little flat tufts, whereas on all Locrian bronzes the hair is usually expressed in more regular strokes.

In conclusion, Magna Graecia would appear the best tentative attribution, though stylistically its features hark back to the Peloponnese and the Severe Style, which became popular in Southern Italy and Sicily, and to a lesser extent in East Greece, where a good comparison is the profile of the head on the Nisyros stele [18] dated 460-450 B.C.

1 JE. Langlotz (Studien zur nordostgriechischen Kunst, p. 151) states "... said to have been acquired in Smyrna"; unfortunately accompanied with no indication as to the source, and possibly erroneous (the book contains numerous errors and was unfinished at the time of Langlotz' death). It entered this collection by acquisition at a sale at Galerie Fischer, Lucerne, on 12 June 1956, no. 305, p. 27, pl. X, with no indication as to provenance, find-spot, collector or otherwise.

2 Verbal suggestion of J.D. Beazley to the author in the 1950s in Paris.

3 For the symbolism of the cock, see Hoffmann, H.: Hahnenkampf in Athen. Zur Ikonologie einer attischen Bildformel, RA 2/1974, p. 195 ff. and for the iconography, ibid., p. 205 fig. 9 on the shoulder of a Black-Figure neck amphora.

4 Another handle, almost certainly the pair to this one, though the author never saw them side by side, was on the market in the early 1950s and said to be from Greece. It entered the Charles Gillet collection, Lausanne. Its present whereabouts are unknown. A smaller handle, very similar, was on the London art market around the early 1980s, both provenance and present location unknown.