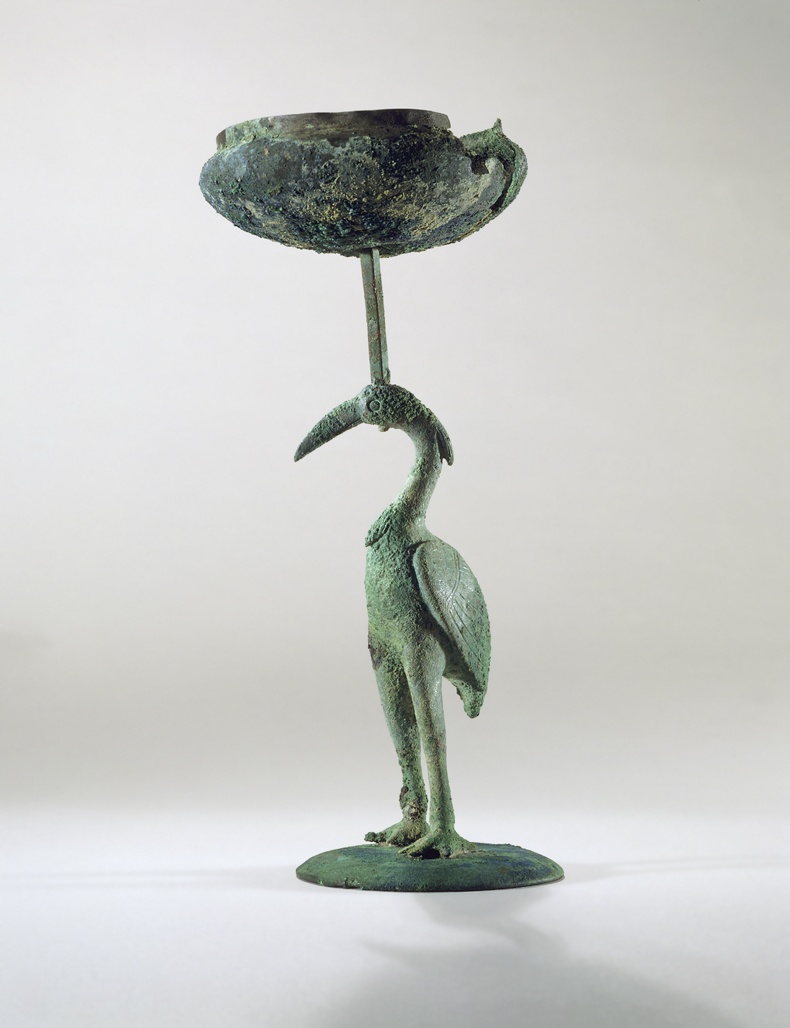 Solid-cast by the lost wax process, chased in the cold; the bowl, bronze sheet cut and hammered, is supported by a forged rod of squarish section with a flat rivet on top - its lower end, narrower and round, transfixes the bird's head vertically.
The bird stands, its webbed feet soldered on a slightly convex base of thick, hammered bronze plate.

The bowl, a small section missing and a few breaks mended, secured on top of the rod; the base reattached.

Herons in bronze are rare and unfortunately the author is unable [1] to give a comparison for a similar incense burner. A small solid-cast heron of classical date, similar in stance and type, was in the Schimmel collection [2]; a rivet through its webbed feet indicates that likewise it was affixed to a base. The best depictions are to be found on late 5th century gems as described and illustrated by J. Boardman [3]: the closest for the stance is a heron on an agate sliced barrel.

Herons as a motif were especially common in the late 5th century appearing on Attic vases, and engraved on gems and rings. Often illustrated with women, they are thought, like cranes, to have been kept as domestic pets: a chalcedony scaraboid shows a reclining half naked woman as she pets a heron, on a mottled jasper scaraboid she is standing behind a heron with her right arm extended above its head as if she is about to feed him a locust or grasshopper, and a cornelian cylinder illustrates a half naked woman walking alongside the strutting bird as she touches its head with her right hand [4].

Also in this period women are shown standing or seated next to a thymiaterion: standing as for example on gold rings from Ithaca and Crete, and on a silver ring, but seated on a gold ring acquired in Constantinople [5].

Thus, using a heron as a support for a thymiaterion would be appropriate for a household furnishing and in keeping with the popular imagery of the time.

1 Unless the author's memory fails him, some twenty-seven years ago in the old museum in Syracuse, up the main stairs turning right on the landing and going into the room on its end, with two windows on the opposite side, in the old wall-cupboard vitrine on the right as one entered stood, among many items, an almost identical heron, smaller, somewhat damaged, possibly with a protuberance on top of its head. Obviously from the same workshop and surely found in Sicily. The exhibits in those days were accompanied by very old, lovely little hand-written ink labels, thoroughly informative, attached with thread. However over the years, time and the sporadic dusting of the cases had detached many of these from the objects they belonged to. The staff were absent and notwithstanding all his efforts the author could find no inventory number or reference. The museum was closed for over ten years and when the author visited the new one some four years ago, on a Sunday, no staff obviously, he could not locate the heron. Over the past four years he has written several letters to the museum joining a photograph of the present heron and requesting information but unfortunately has never received a reply.