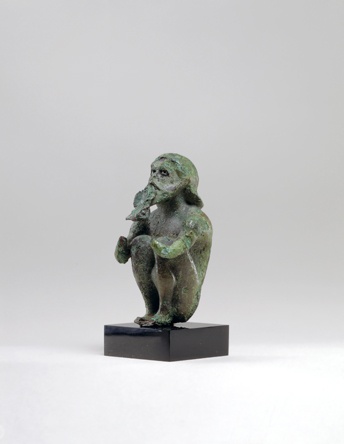 Solid-cast by the lost wax process, carefully worked in the cold, burnished and polished. Three round holes: one between the buttocks, carefully worked, retains traces of tin soldering unless it be simply tenorite (CuO, a black copper oxide); on top of the head, slightly off centre, larger in diameter with traces of tenorite (?) on the rim; and one smaller irregular hole in the lower lumbar region.

Condition: patina light to greyish green with traces of tenorite, abraded in places, a long scrape on left of back reveals metal; the odd excrescence and pitting of surface, the syrinx chipped and corroded, the extant lower half cracked. The eyes, irises once inlaid, still retain their tenorite sheet covering, traces of tenorite adjoining here and there. It is probable that the whole figure was covered with tenorite to give it the appearance of silver. Missing: both hands, toes of feet and probably a tail which would have been inset in hole in lumbar region.

This naked squatting silenos is playing the syrinx, his eyes gazing upwards, carried away, as though in trance, by his own music. He belongs to the world of comasts and satyrs.

Compact in execution, an appropriate form for a finial, whether surmounting a pin, the lid or handle of a vessel, for which the carefully worked hole between his buttocks would be fitting. Another hole just above his coccyx was for the attachment of his tail, and a third one slightly off centre on the back top of his head might have served to attach a chain, as we had suggested for the geometric seated figure, cat. no. 74, indicating that he could have been worn as a pendant.

He is to be dated at the very end of the Archaic period, and though very Corinthian in style, is surely from a Syracusan workshop. Syracuse was a colony of Corinth with which close political and commercial ties were kept.