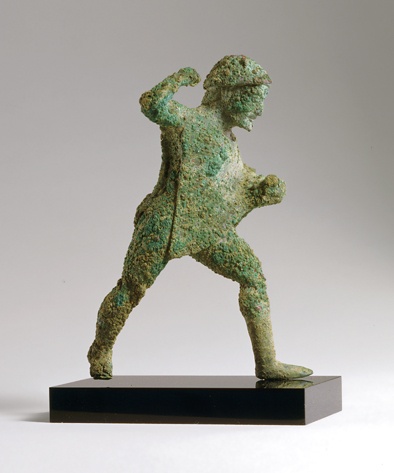 Solid-cast by the lost wax process, the face and certain details worked in the cold, the edge of his cloak incised with a line.

Condition: surface very granular with earth deposit and covered with bright green cuprous chloride (?), spots of red; patina a pale green where visible. Missing: club - once held in right hand - and front of right foot. Both hands, spot above left knee and heel of right foot damaged by corrosion.

This statuette, which we and others have called Herakles [1], would be highly unusual for the hero in that he wears a chlamys, and a cap on his head. We know of no other representation of him dressed in this fashion, for normally he should wear, if anything, a lionskin. The closest parallel for the stance is the dynamic masterpiece in Paris [2], a magnificent work of art, where the hero is represented holding a club in his upraised right hand behind his head and in his left hand, arm outstretched, the remains of a bow, an oft repeated motif. Two representations in the round of him fighting a snake are a bronze statuette in Athens [3] from Messenia, where he is dressed in a corselet, his right hand was raised behind his head [4] (surely holding a club), he is shown grasping the snake in his left hand as it is trying to lunge for his face, and a statuette in Paris [5] from Doris where he is dressed in a lionskin his club likewise raised, but with what was probably a bow in his outstretched left arm - the snake cast separately rearing up like a cobra.

We had always thought that the four rope-like ridges on his upper left arm represented what remained of a snake [6], which his left hand would have grasped just below the missing head. Today, upon close re-examination, it would seem that his chlamys starts pleating above his left thigh and that these pleats become thick as they bunch up over his left arm. Expressed clumsily as though coils of rope, we had in the past imagined a snake. Also, the hole that bores through his clenched right hand is too narrow for the handle of a club, and its direction would have followed [7] that of his face which looks down to the ground slightly to the right in front of him. Thus, he is probably a countryman, a shepherd, spearing a boar or a predator coming to attack his flocks. His left fist is clenching the chlamys to avoid it getting in his way.

The inspiration for the stance in this case, though a very natural one, could possibly be the so often illustrated figure of Herakles on Greek vases, bronzes and gems.

A charming work with some gusto but rather provincial with its column-like left leg and lack of sophistication in the manner the folds of the chlamys are shown over the left arm, he is surely the product of a local Greek workshop in Sicily, possibly in the region of his alleged find-spot.

4 We suppose that the reproduction in LIMC is the same figure as the one reproduced in AJA, 38, 1934, p. 310 fig. 4. In the meantime, if the same, which it must be, the statuette has been ruined. Herakles has lost the lower part of his left leg and foot, and the tang that relayed it to the snake; and his right forearm. The snake has lost his lower jaw which gave him a magnificent expressive head. Herakles' head, intense in purpose, has now taken on a weakling's expression.

6 Upon consulting LIMC, loc. cit., on 4 December 1993, we noted that J. Boardman had said of the chlamys ("part taken wrongly for a serpent in Dörig, J."). J. Dörig was the editor of Art Antique, but this author was responsible for the entry and thus for the mistake.

7 Presently not quite so as the position of the wrist is
slightly distorted.