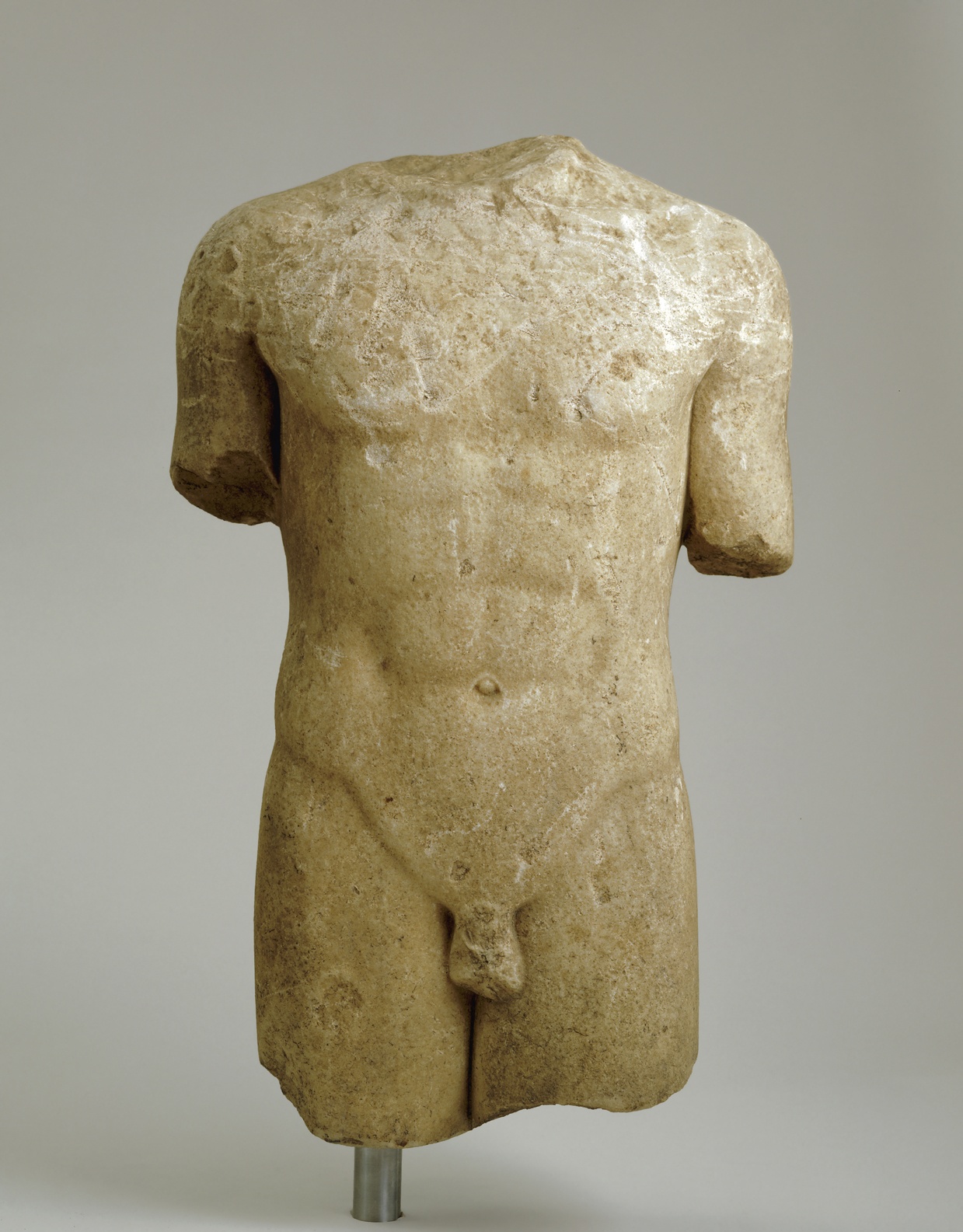 Condition: yellowish white to grey, some oxidization and surface discolouration. Missing: the head and neck, arms [2] from above the elbows and both legs from the upper thighs, penis missing with serious damage to testicles. The surface weathered and badly abraded, especially over the breasts and shoulders; the whole back deeply gashed with a section of about 10 cm hacked out from the neck break down.

This youthful torso is shown in a conventional frontal stance, the weight on his right leg and the left one slightly advanced. His torso is well modelled but relaxed with pectoral and stomach muscles clearly indicated, the latter divided by three horizontal lines. His broad back is carefully modelled with the shoulder-blades in slight relief, a well marked spinal furrow and developed buttocks. The profile view shows a gently curved contour for the back.

A rare surviving example of a type of sculpture that must have been fairly well represented throughout the Greek centres of Magna Graecia and Sicily [3]. Local styles developed influenced by East Greek, Island or other schools. Groups may be suggested around examples of kouroi from Megara Hyblaea, a Syracusan workshop and the circle of Pythagoras in the region Reggio-Locri. Sicilian production would seem to be characterized by a certain elongation and tense muscularity, somewhat more plastically firm than the heavier South Italian. Particular traits of the latter is the heavier anatomy with its distinctively muscular stomach and back, though the frontal view is fairly flat. There is a rapport for his muscular characteristics and spinal furrow with an older Metapontum (Lucania) [4] example.

Several scholars have expressed varying opinions. G. Richter places him in her Ptoon 20 group [5] as a late member, but her groupings are mainly concerned with the development of types. K. Schefold considers our example to be by an Eastern Ionian artist [6] who probably worked in Magna Graecia, and possibly in Locri, an Ionian colony. And E. Langlotz would place [7] him in the workshop of Pythagoras under which he lists the New York [8] bronze reputedly from Smyrna which, though of later date and developed in movement, is in our opinion comparable. There is no doubt that the soft modelling and delicate outlines relate our example to Eastern Ionian art. However, it must be remembered that in addition to multiple influences that reached South Italy and Sicily around this time, the local schools of sculpture influenced each other and their artists travelled.

Consequently, with the greatest caution we would like to express the opinion that this torso is a local South Italian example from the region Reggio-Locri, possibly an early creation within the circle of Pythagoras if such a grouping can be defined, and to be dated rather later than earlier on account of
a certain provincialism.

1 In Meisterwerke griechischer Kunst, the marble was described as Chiot, which though a possibility is far from certain. In June 1959, a small chip had been taken to the Greek and Roman Department of the British Museum for analysis which they kindly passed on to the Department of Mineralogy of their Natural History Department who wrote back the following: "We are unable to identify this marble with certainty but can be sure that it is not Pentelic or Parian, at least as far as we can tell from comparison with accessible specimens. ... It resembles certain marbles from Asia Minor and the Ionian Islands (notably Chios) both in its dark purple fluorescence and its texture, but I would not be justified in positively attributing it to this source." (S.E. Ellis). The author believes that, except for a few major quarries, the ascribing of marble to a definite source is still problematic. There are yet quarries to be located that were worked in ancient times and others that are still exploited today where, in some cases, traces of ancient quarrying have been obliterated.

2 The stump at the break of the right arm is in all likelihood fortuitous, though its appearance is highly unusual and there is a remote possibility that it could be the remains of the inset for the rest of the arm that would have been made separately, and if so, probably an ancient repair.

7 Verbal communication to the author in the very early 1960s.