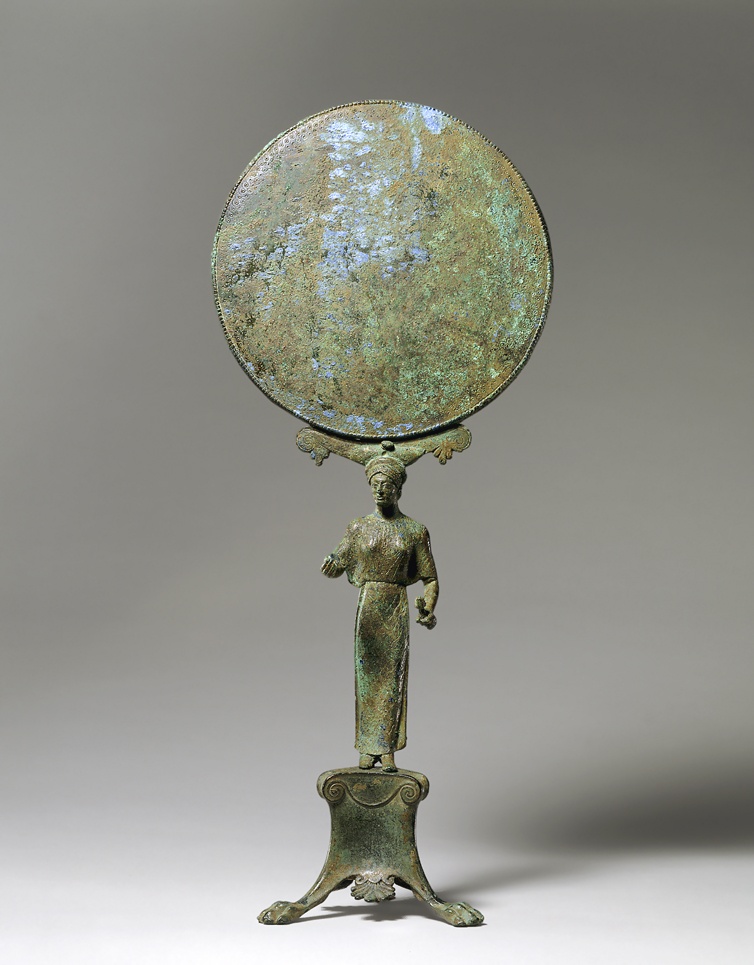 Comprised of three main elements joined together: the mirror disc, the caryatid and the stand.

The mirror disc probably cast by the lost wax [2] process and in a second step cold-worked: hammering and shaping from the back, going over and adding to the decoration with careful punching and chiselling, the slightly convex mirror surface burnished and polished to a high sheen.

The caryatid solid-cast by the lost wax process, finely chased, chiselled, punched and grooved in the cold and carefully burnished. The lotus bud in her left hand made separately and inserted. The intermediary element above her head to which the mirror is attached was either cast separately, possibly from an open mould and fusion-welded in a cavity prepared on top of her head or cast together with the caryatid. Damaged in antiquity it has been repaired. On the front, above her head extra metal has been fusion-welded on and a joining strip at the back has been added to replace the brace [3].

The stand hollow-cast by the lost wax process, its three feet solid-cast. Chiselled in the cold, carefully burnished and polished, the hollow part filled with lead.

The statuette and intermediary element a lighter smooth olive green almost completely covered with a granular surface of bright green cuprous chloride and spots of bright dark blue and ingrained hard brown earth deposit. The back of the statuette fairly smooth, the brownish earth like a slip over most of the surface with spots of green cuprous chloride. A nick to the tip of her nose and to her fillet at the back.

The stand a smooth olive green with brown earth incrustations. A crack above one of the paws and to one of the palmettes, slight wear to the claws of the paws.


Delicately modelled and clothed in a supple belted chiton, the Kore stands - with her left leg slightly forward and with her feet shod in slippers - on a tripod decorated with palmettes and volutes, resting on three lion paws. The chiton is fastened with six or seven buttons over the shoulder and along the upper arms on each side, three lines mark its neckline; its front is decorated with engraved delicate double line ripples. Single lines like rays of sunshine radiate from under the breasts to the edge of the kolpos. Below, double lines undulate diagonally towards the centre, where they meet or slightly overlap. The back is undecorated. A thick fold is indicated by ridges on either side of the chiton.

She holds an apple in her extended right hand and in her left a large lotus bud. Her hair is dressed in horizontal tresses over the forehead leaving the ears free. At the back it is combed down
in wavy lines and drawn up in a bun over the nape. She wears a diadem.

The mirror support described [4] as a "simple inward 'Y' arc cradle" is engraved; its present brace a coarse artisan's repair of the period. The front surface of the disc is embellished with a double row of punched connected circles (a sort of double guilloche) and the raised beaded rim is decorated on its outer section with a frieze of narrow ovolos.

This caryatid mirror is difficult to assign to a given artistic region or school. The author had ventured Sicyon (?) [5] and Cl. Rolley said North-East Peloponnese (Sicyon?) [6] giving weight to the attribution. L.O. Keene Congdon has said "strongly influenced by the Sikyonian school, probably South Italian" [7].

It is of course possible that the "allegedly from Dodona" be a misleading indication for the provenance, though, of course, a work of this sort could very well have been made in Magna Graecia and have found its way to Dodona. In favour of a South Italian provenance might be her similarity with the general shape of the face and ears of the enthroned goddess from Tarentum in Berlin [8], though their mouths are different. However, it should be remembered that Sparta was in the lead during the first half of the 6th century and influenced Corinth. Thus in the latter part of the century and at the beginning of the 5th, the same background at one removed would have, to a certain extent, had its bearing on Tarentum and the North-East Peloponnese.

The Kore bears a rapport for her elongated form and what she is holding in her right hand with a far earlier representation in Athens [9] dated to the end of the first half of the 6th century, ascribed by L.O. Keene Congdon to Sparta and which U. Häfner calls provincial. However, there is also a distant rapport with the mirror in Paris [10] said to be from Thebes and given by E. Langlotz to Sicyon. This latter has been grouped with the St. Petersburg [11] mirror which E. Langlotz ascribes to Aegina and with which L.O. Keene Congdon concurs saying "Aeginetan", the Boston mirror [12] attributed by L.O. Keene Congdon to Sicyon, and the Cleveland mirror [13] that E. Langlotz gives to Sicyon. The Cleveland and Boston examples are said to belong to Argos by R. Tölle-Kastenbein [14].

If R. Tölle-Kastenbein's attributions be followed, it is possible that the present caryatid might belong to the last phase of Argive production. All the above references are listed only "en passant" for they require serious and lengthy analysis.

In conclusion, we think that, though Magna Graecia is not totally to be dismissed, the caryatid belongs to the North-East Peloponnese and have kept the attribution to Sicyon. An unusual and particularly sensitive example of the new style that evolved out of the Archaic period.

2 Though conceivably hammered to shape from bronze plate. If by the lost wax method, this might have been prepared either by pouring wax on hot water, which was then allowed to cool, or shaping a clay form on a potter's wheel and then making the wax on it. For the former, the degree to which the water was heated conditioned the curvature of the disc. In both cases the edges of the wax disc are curved up and decorated on the front, a mould is then built around for casting. The author is unable to assess the validity of L.O. Keene Congdon's Water-casting concave-convex wax models for cire perdue bronze mirrors (AJA 89, 3, 1985, p. 511 ff.); however, Claude Rolley (RA 1986, fasc. 2, p. 379) calls it a curious and useless method.

3 A rivet from front to back through the intermediary element (cradle) and the strip (brace), a lumpy head in front, a flattened hammered one at the back. The artisan who made the repair originally thought to pass the rivet right through the thickest part just above the fillet in front and started drilling a hole for this purpose; surely realizing that it would come out too low at the back to secure the strip strongly, he started again above.