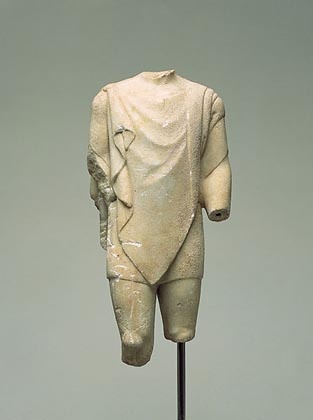 Condition: chipped and scratched, the colour a light yellowish golden with limestone incrustation in places.

Missing: the head and part of the neck, the right arm from the elbow down, the left arm from just above the wrist, the right leg from below the knee and the left leg from across the knee. In the stub of the left arm a hole c. 25 mm deep and c. 6 mm in diameter, probably for an ancient repair.

The figure stands with his weight on his left leg, the right upper leg forward and slightly bent back at the knee. He wears a short chiton, visible across the chest just below the collar-bones and with sleeves ending above the elbows, with two thick overlaps at the waist surely girt by a belt. The tight-fitting chiton ends below the buttocks around the upper thighs. A chlamys is draped over the shoulders and falls in folds, it is fastened on the right with a circular fibula. In archaic times the folds of his cloak would have been treated differently: more schematically, spaced closer, sharper, more pointed and drawn in straighter lines. Here, at the inception of the early Classical period, they are softer and
more natural.

This youthful figure, who must be Hermes [1], epitomizes the miraculous transition from the archaic to the classical, from aristocracy to democracy, from static severity to natural movement, at the beginning of a transitional period in sculpture called Early Classical or Severe Style. This sculpture embodies this moment of spiritual and political transition with its feel and awareness of the human body, when subject matter becomes more important than type. Perhaps the first and one of the last extant great marble sculptures that both announces and expresses the transition, for henceforth the artists were to prefer bronze for its potential, a medium appropriate to the rendering of naturalism and the new conception of man. It is because we have no large-scale bronzes for this period but only the marbles of Olympia, that a clear vision of the process of contemporary development in sculpture is difficult. Further, regional differences that determined art before the Persian invasions, had given place to a less differentiated sculptural output, a consequence of the citizen's awareness of his individual importance (they rowed the triremes at Salamis and carried the day), and a new national consensus as many Greeks had contributed to repulsing
the Medes.

One senses his youthful assuredness as he steps forward, his body still imbued with archaic purity about to burst from the bonds of archaism to the reality of his natural self. The subtlety of the planes and curves of the lower front tunic, is of a plastic virtuosity unsurpassed in the writer's opinion in any sculpture of any age.

Herein lies the Greek miracle, when man was at the dawn of a new realization of self.

There are contrasts between the different parts: the tunic, the thighs, the subtle volumes of the lower neck and the upper part of the back where they join, and we feel life emerging through the collar-bones. This miraculous moment of transition is in considerable part expressed by the curves, folds and draping of the chiton and chlamys over the body, the way it clings to it and hangs off it, and outlines the nascent expression of life and movement.

In sculpture the style is reputed to have started at Sicyon. Sicyon, somewhat in the shadow of Corinth, had a long reputation for its prowess in sculpture and if one looks at the Sicyonian treasury at Delphi, the metope with the Dioskouroi [2] as they lead the cattle, one can understand the greatness and eminently satisfying soberness of archaic sculpture at its best. This Hermes, though embodying the birth of a new development, the greatest that humanity has ever known, had his plastic roots in the past. The manner in which on the Dioskouroi the chlamys falls over their shoulders with its folds ending in a point in front, their waists belted, and their proud bearing are true antecedents. The difference is naturalism, the modelling between the trapezia and the clavicles, in the way the knees are represented; it is in the folds, and above all it is in the incredibly subtly curved plane on the lower front of the chlamys.

1 François Chamoux, on a visit 16 August 1994, questioned the date c. 480 B.C. suggesting 470/460, within the sphere of the Olympia pediments, because of the evolution of the drapery, the incredibly fine workmanship (e.g. the right knee and the buttocks less salient than in earlier times) and the attribution because of the refinement of the dress inappropriate for Hermes/shepherd, and suggested maybe a funerary statue of a youthful warrior of aristocratic background, possibly holding a spear. On a visit the next day N. Himmelmann likewise thought the date too early by a decade, but saw no objection to it being a Hermes.