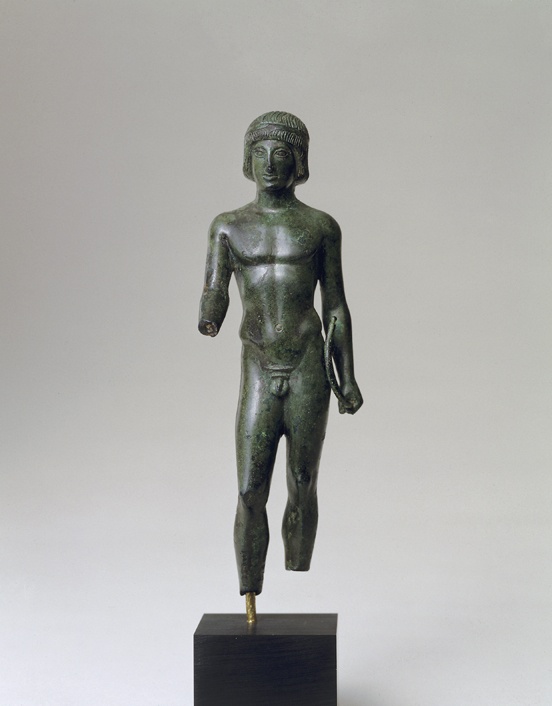 Solid-cast by the lost wax process, carefully chiselled and worked in the cold. The bow made separately. The inscription punched and chiselled on.

Missing: the right hand and wrist, both feet and the bowstring. Very slight abrasion to centre of headband and slight damage to tip of nose, a nick to left side of upper lip, scrape marks along right arm and on left upper arm. A blow to inside of right knee and a few very small air bubbles from the cast.

What are the antecedents for this youth? What are the sculptural influences? To what school does he belong? What was his function or purpose, and what does the inscription mean?

E. Langlotz postulated a school of Kleonai [1] geographically located between Sicyon (next to Corinth) and Argos under which he grouped a number of sculptures that relate to certain characteristics of Sicyonian and Argive production. He did not consider Arcadian statuettes justified an Arcadian school [2]. We feel that many of the associations among statuettes and other sculptures in which he places this Apollo are well founded. To what extent is a school a group of workshops or artists, to what extent does a great artist alone or with his assistants constitute a workshop does not seem to have been defined.

W. Lamb [3] ascribed a whole group of bronzes of varying quality to Arcadia in which she includes the present statuette and states that Tegea (well placed on the road between Argos and Sparta) had a strong claim to be the centre of production though it was possible that there was more than one centre.

There must have been small workshops throughout Arcadia that produced a varied output that share certain rough though not uncharming traits, second-rate artistically but influenced by neighbouring Argos and to a lesser extent by her other neighbours. Because the present Apollo was dedicated in Lousoi (Arcadia) and is certainly from the same workshop and possibly by the same artist as the bronze statuette of Perseus in Sparta [4] found at Mantineia very close to Tegea, we agree with A. Delivorrias that there must have been a major school located in Tegea. To this school surely belongs some of the sculpture attributed by E. Langlotz to Kleonai. Whether a school ever existed located geographically there is an open question, though to give a name to most of the ensemble that he constituted seems appropriate.

The Apollo stands "in a modest attitude of self contentment" [5], calm and rather taut, his body of a slim but compact build. His head slightly turned to his right as is his right leg with the knee jutting forward, his weight is on the left leg. The position of the twist of the head is unusual but he looks where he does since he probably held a laurel twig in his right hand, symbol of his power as a god. The bow in his left is simply an attribute [6].

E. Langlotz sees his antecedent, which he places within the same group, as being the Aristomacha votive offering [7]; they bear comparison for the oval of the head, the low forehead, the face with its soft modelling of the brow and lids, and the full rounded cheeks. A comparison slightly later in date than the Apollo and ascribed to the same workshop by E. Langlotz is the mirror in Dresden [8]; indeed similar, it bears comparison for the general softness of the surface, the way the hair is incised, the neck, and to a lesser extent the eyes and mouth. But a closer and telling comparison - for the facial expression which is so similar, its oval shape, the eyes and the mouth, indeed the way the hair is grooved, which he also cites - is the girl with an offering in Boston [9], only very slightly later in date.

Most revealing, a twin in certain aspects and only slightly later in date, is the statuette of Perseus in Sparta [10]. The hair, for its shape, fillet and engraving, is identical, as are the face, forehead, eyes, nose and mouth, and they both share a somewhat sullen expression. The body is also so similar that the same artist must have made them both, as suggested by A. Delivorrias. The only differences stem from the gesture of the upraised right arm and the slightly greater contrapposto with less severity in the outlines of the bust.

These last two statuettes differ from stockily built Argive youths in the feeling they give that their torsos are shorter and their thighs longer. They are milder and more delicate in appearance, they seem to have a certain freshness and elasticity of body though with a somewhat dry and awkward grace [11]. These traits characterize an individualistic manner that fits this Apollo and the school, though not a powerful one, to which he belongs, and which E. Langlotz [12] describes as having the build and attitude of Sicyonian works and the softness of modelling of Argive sculptures.

It seems that the period between 470 and 450 B.C. corresponding to the middle and later Severe Style produced the greatest quantity of large statues of Apollo [13]. A.W. Johnston [14] considers the small statuettes to derive from large-scale sculpture and that when they do so, as in this example, they possess a freedom from constraint and a liveliness which would not have been permissible for large cult images. Our Apollo's half-long hair is an Argive influence and unusual for Apollo in this period, and thus surely a local characteristic of this school in this time, as are the forehead and cheeks finely framed by the hair.

Where was the statuette placed? Its inscription would indicate that it was a votive offering within the precinct but not necessarily to be placed at the altar. Though we have a context where a statuette said to represent Apollo in Kalapodi [15] is embedded from the lower calves down in lead in a votive altar of a sanctuary said to belong to Artemis. The image of Apollo, a god of conciliation, would be a fitting offering for Artemis Hemera (= gentle).

For a statuette of Apollo similar for his right hand extended forward in offering, possibly here holding a phiale, and his left grasping a bow, is the earlier bronze in New York [16] said to be from Hagios Sostes near Andritsena (Phigalia, in Arcadia). A local antecedent for the iconography.

The inscription in Doric dialect which is here given in the original Greek offers certain difficulties for its interpretation and translation. This author is totally incompetent to discuss the matter. Apparently the basic text, says L.H. Jeffery [17], is clear: "I am of Artemis the Gentle one". The rest of the inscription is open to different interpretations.

12 Langlotz, E.: Frühgriechische Bildhauerschulen, p. 70.
The present author agreeing with A. Delivorrias in ascribing this Apollo and the Perseus to Tegea, has applied to them the characteristics E. Langlotz uses to describe his school of Kleonai.